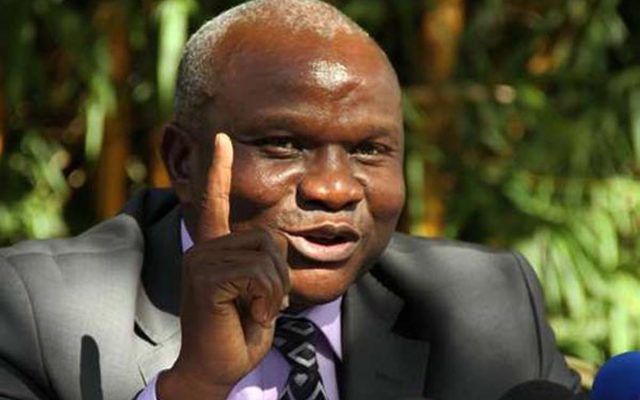 A 39-year-old man claiming to be the son of former minister and South Mugirango MP James Omingo Magara wants the High Court in Kisii to have the former legislator take a DNA test to prove his paternity.

Justus Arunga Mauti through lawyer Wilkins Ochoki wants the court to declare him the biological son to Omingo who served as an Assistant Minister in the coalition government of retired President Mwai Kibaki and former Prime Minister Raila Odinga.

In a report published by The Nairobian, Arunga told the court that he seeks parental care, love, support and the right to enjoy dignity, security and equality like other family members of the former legislator.

“My client’s rights to dignity inherent in a human being, the recognition and protection of his human and legal rights have been violated by the respondent in this case. We are seeking an order compelling him to undergo a DNA test to ascertain that he is the biological father of the petitioner,” Ochoki told the court.

According to Arunga, his mother Peris Bochere Magare met Omingo in the late 1970s when she was a student at Riosiri High School while the former MP went to Nduru Boys High School, after which they got into an intimate relationship that resulted in his birth.

He told Justice Anthony Ndung’u that after his birth, his parents parted ways. His mother got married to the late Councillor Mauti Magare who became his foster father, while Omingo pursued further studies in India.

“I have held several meetings in the past with Omingo Magara to talk about the issue of him being my biological father and to further seek recognition as a member of his family. At no point has he ever denied being my father during our previous meetings,” Arunga told the court.

He further told the court that he met former South Mugirango MP, the late Enock Nyankieya Magara in the company of Omingo hoping to resolve his paternity issue but their meeting did not bear fruit as Nyankieya died in a road accident, shortly after their meeting.

Arunga added that the fact that Omingo has denied being his biological father and does not want anything to do with him, has caused him stress and trauma over his true identity.

He told the court that he last met Omingo in 2013 when he was contesting for the Kisii senate seat when he promised to get him a job, claims that the politician has denied.

Omingo who is represented by Nchogu, Omwanza and Nyasimi Advocates told the court that he was a student at Nduru Boys School between 1978 and 1979 and did not know Arunga’s mother and does not recall meeting her during his life in high school.

“I never had an intimate relationship with the petitioner’s mother or any other woman while in school. After high school I proceeded to India for my university education, I have known Arunga’s mother as the wife of the late councilor Mauti Magare who was a close friend,” Omingo said.

The former minister further stated that having known the late Magare as one of his close friends and political supporter, it would be disrespectful to their friendship to have child with his wife and did not disclose to him.

Omingo said he was not willing to undergo DNA test since there is no possibility of the petitioner being his biological son and subjecting him to DNA would be an intrusion to his privacy and integrity.

The former MP told the court that the petitioner had lied to the court under oath that they met in 2013 while he was running for the Kisii Senatorial seat and promised to secure him a job asking that he proves to the court that happened. The matter will be coming up before Justice Ndung’u seating at the Kisii High Court on May 19.