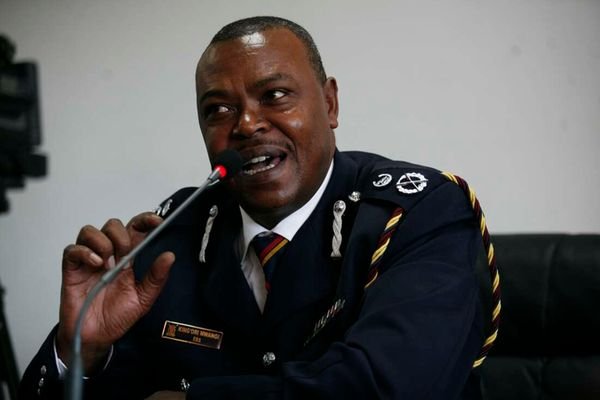 For eight hours, three armed robbers, among them a university student and an alleged robbery convict, held a woman hostage inside the home, as they stripped the house of valuables.

The machete-wielding men had two objectives; rob the house clean and recover high-calibre guns belonging to the police boss.

At the end of eight hours, followed by a 10-hour manhunt, the Nation can today reveal details of the robbery at the home of the senior officer who was away at the time.
Detectives are now treating the case as an inside job after arresting and questioning six people.

Pembe Tatu Estate, on the outskirts of Nyeri, has fallen victim to a wave of burglaries and robberies in the past one month, and this time, not even one of the most powerful police officers in the country was spared.

According to police and witness reports, three men waylaid the caretaker of the property and forced her into the house.

The woman, whose identity police have withheld, was allegedly returning to the house after getting dog food.

“As she was getting back into the compound, the men ambushed, and subdued her, forcing her into the house, threatening to kill her if she raised the alarm,” Nyeri County Police Commander Adiel Nyange said.

This would be the start of an eight-hour siege, as the men took charge in the house. The neighbours were oblivious of what was going on in the house.

The robbers forced the woman to feed the guard dogs as she usually does, and keep them leashed, so as not to raise the alarm, said police.

Taking their sweet time, the men ransacked the house, going from room to room as they heaped all valuables they came across in one place.

Among the items stolen was a 12-gauge Taurus ST-12 tactical shotgun, a loaded pistol magazine and shotgun shells, which the police boss privately owns. Other items stolen from Mr Mwangi’s safe were a gun cleaning kit, assorted bullets and police berets.

The robbers also allegedly forced their hostage to cook for them ugali and meat, which they enjoyed as they waited for their getaway vehicle.

A few minutes past 1am, two motorcycles arrived at the home and started carrying the loot from the home, headed for Chania and Majengo slums, barely two kilometres away.

After they had made several trips, neighbours became suspicious of the movement. That, coupled with the recent spate in robberies, made them alert police officers on patrol.

“The call to the police was not made from the home, but by residents of the area. They reported suspicious movement by boda bodas in the area and patrol teams were dispatched,” Mr Nyange said.

As they responded to the call, the officers bumped into one of the motorcycles, with two men carrying some of the electronics from the home.

“As soon as they saw the officers, they ditched the motorbike and the items that they had stolen, but our officers managed to corner another group,” the police boss said.
At Mr Mwangi’s home, police found the house help tied up and gagged.

The officers pursued and arrested five of the suspects at 2am, and began a search for the firearm and ammunition.

During the manhunt and several raids in Chania and Majengo, police recovered the electronics, clothes, assorted household goods and even slaughtered chickens that had been stolen at the home.

Two stolen motorcycles that were used to ferry the loot were also recovered. Police used registration details of one of the motorcycles to track down its owner and subsequently, the rider who was using it at the time of the heist.

By dawn, detectives had managed to arrest three key suspects in what has emerged to be a well-coordinated robbery gang operating from the sprawling slums at the heart of Nyeri.

Detectives acting on information from the suspects eventually landed in Majengo slums at 1pm on Monday, where two of the suspects were holed up.

Perhaps waiting for the heat to die down, the two men were found sleeping in their houses by undercover police.

In one of the houses, police recovered the stolen military-grade firearm and ammunition hidden under the bed, while in the other, they found machetes and stolen electronics.

In total, police arrested five men – three who helped to carry the goods from the house, and two among those who broke into the house. The third suspect is still on the run.

And in an interesting twist of events, police now believe the caretaker, who had supposedly been held hostage might have, in fact, been working with the robbers.

Detectives privy to the investigations said findings have since shown the woman provided insider information on the home and tipped the robbers on the presence of the guns.

Police are now holding her for further interrogation amid suspicion that she could have an even closer relationship to the gang.

“Surprisingly, one of the guys is said to be the boyfriend of the worker,” Mr Nyange said.

Among the suspects arrested is a third year student at Dedan Kimathi University in Nyeri, while the other is said to have been previously convicted on robbery with violence charges and sentenced to life imprisonment.

Detectives are still trying to uncover how he ended up free.

A manhunt is still underway for the third suspect.

“This is a final warning. Not again will criminals steal in Nyeri and run free,” the police boss said.