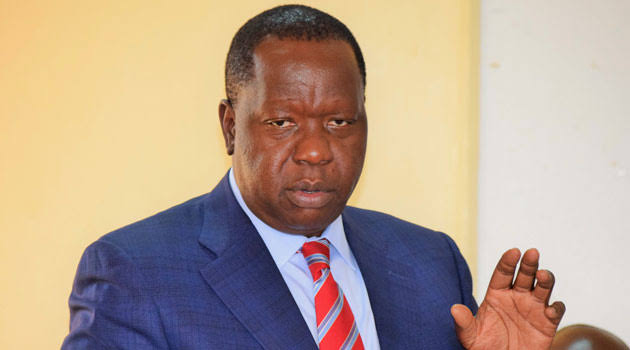 Interior CS Fred Matiang’i announcement that the government is crafting laws to stop marriages among colleagues in the police service has caused an uproar.

Matiang’i spoke at the National Police College in Kiganjo, where he had been officiating a new training programme for graduate cadets.

In his speech, Matiang’i said that he had formed a team that would develop rules to guide relationships in the National Police Service.

The move, Matiang’i said, was to address the high number of spousal abuse, killings and sexual harassment in the police service.

The matter would be taken under a soon-to-be-formed Gender Relations Office.

The office will be under the Inspector General, who will manage it.

“Some of the female police officers have filed complaints on sexual harassment. I want to assure you that this won’t happen in the future,” Matiang’i said of the move.

He stated that once passed, the laws would see one officer leave the Service if two police officers fell in love.

“You are police officers, and we don’t expect you to have relationships with your constables,” Matiang’i said. This framework, he said, would make the Service a dignified place to work.

Once the team comes up with the rules, they will then present them to the National Security Council, which will then approve them for implementation.

Matiangi defended the move, saying that similar practices had taken place under the Kenya Defence Forces.