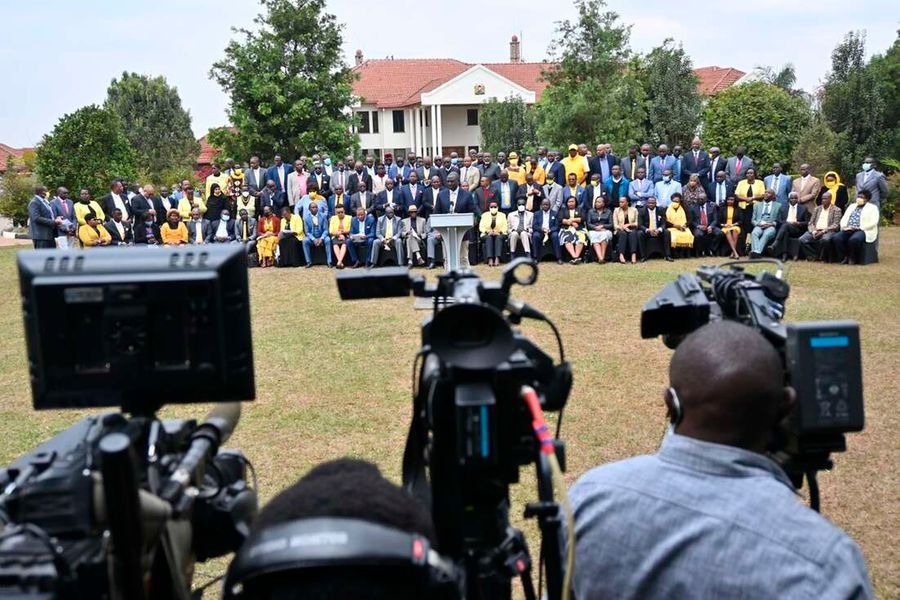 The once quiet deputy president’s official residence in Karen, Nairobi, is now a beehive of political activity after its occupant, Dr William Ruto, turned it into his 2022 presidential campaign headquarters.

Since President Uhuru Kenyatta banned political rallies to arrest the spread of coronavirus, Dr Ruto retreated to the palatial home, nicknamed ‘Hustlers’ Mansion, from where he has hosted hundreds of delegations.

The sheer frequency of the meetings has attracted the attention of his detractors in Jubilee Party, with some raising concerns over the use of the residence, paid for and maintained by taxpayers, to further personal political agenda.

Recently, the palatial home that sits on 10 acres was in the news over the change of security teams guarding the DP that saw the replacement of the General Service Unit (GSU) with Administration Police (AP) officers.

But away from the security changes, the home is now popular with political gatherings. Just yesterday, Dr Ruto hosted a Nairobi business community.

“Met and engaged with small-scale traders from Nairobi County at the Karen Residence; agreed to press for the modernisation and upgrading of public markets, and access to affordable credit to businesses,” the DP tweeted after the meeting.

It is at the same venue where the DP in December last year issued fresh demands to President Kenyatta and ODM leader Raila Odinga on the Building Bridges Initiative (BBI) after a ‘Hustler Nation’ Parliamentary Group (PG) meeting.

In August, the DP and his allies once again used the same podium in Karen to hit out at Mr Kenyatta for “ignoring the Big Four agenda and concentrating on the constitutional change drive.”

The residence has witnessed high octane political activities as the DP, seen as one of the 2022 presidential election frontrunners, marshals his troops ahead of what is shaping as a do-or-die affair in his political career.

Commissioned by retired President Mwai Kibaki on November 15, 2012 as the official residence of the country’s vice president, the facility that gobbled up more than Sh400 million, DP’s opponents lament, has turned into a campaign secretariat for his 2022 bid.

It is crucial for large meetings due to its size, facilities and ambiance.

Fitted with three gates, it also has at least six vehicle garage and backup generator, a gazebo complete with a gym, sauna and steam bath, swimming pool, security unit with an armoury as well as pergola walkways and expansive garden capable of hosting large gatherings.

The use of the facility by Dr Ruto for his 2022 vote hunt has been criticised by President Kenyatta’s allies, who accuse the DP of misusing public resources.

“…oh, we have the numbers in parliament. Complete with pictures profiling these numbers at his Karen residence where bodyguards and drivers are sometimes added,” Mr Tuju said in a statement.

Mr Kimunya accused the DP of fighting the government from within after joining the United Democratic Alliance (UDA).

“The decent thing would be to take the earliest opportunity and tender resignation as Deputy Party Leader of Jubilee and as the Deputy President. It happened with first vice president Jaramogi Oginga Odinga, I also did it myself as Minister for Finance when some issues were raised in parliament,” said Mr Kimunya.

The Kipipiri MP added; “Every decent person does that but those without decency can continue living a lie, using their official residence for campaigns, their official government machinery and government offices to carry out personal campaigns while talking badly against that same government they are drawing benefits from. We leave it to Kenyans to determine the character of the person.”

Mr Mbadi said the DP’s Karen residence has been turned into campaign headquarters of UDA and Dr Ruto.

“I don’t think we should refer to it as DP’s residence anymore. Which meetings that would benefit this country are held there apart from meetings promoting his presidential bid?” asked Mr Mbadi.

But Dr Ruto’s lieutenants disagree as they vow to continue using the facility to host DP’s guests.

“That’s the official residence of the Deputy President and he reserves the right to receive his guests who are delegations of Kenyans. That’s not a State Lodge or State House. It is the DP’s home?” Belgut MP Nelson Koech asked.

He termed as “dishonest” assertions by the DP’s opponents, insisting that Mr Kenyatta and Dr Ruto conducted several Jubilee party meetings at State House and nobody raised concerns at the time.

“The President is currently discussing the Jubilee coalition with ODM but they don’t want the Deputy President to explore his party options, are we being honest? UDA Party has its headquarters at Hustler Centre in Lavington and not at Karen,” said Mr Koech.

Murang’a Senator Irungu Kang’ata insisted that the DP’s meetings at Karen are part of his duties.

“He has a duty to meet and interact with wananchi and record their problems for onward transmission to the government. No illegalities take place there as competent and independent police man the facility and would arrest such a situation,” Mr Kang’ata said in defense of the DP’s Karen meetings.

Early this year, Jubilee vice chairman vice chairman David Murathe said Dr Ruto was living on borrowed time and would be evicted from the Karen address in the near future.

Related Topics:NewsRaphael Tuju
Up Next

Man’s stalled vehicle stolen after stepping out for 30 minutes