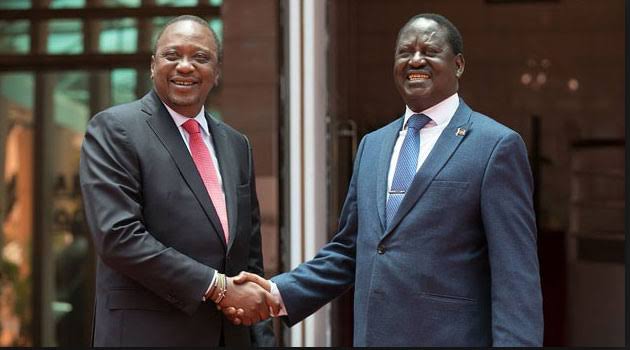 President Uhuru Kenyatta on Wednesday, March 31 drove himself to ODM leader Raila Odinga’s Karen residence where they held a meeting.

According to a report by The Standard, the secret meeting meeting lasted for about two hours.

The duo had talks on Raila’s health, reviving the Building Bridges Initiative (BBI) as well as fighting the COVID-19 pandemic.

“The president and the former premier discussed his health, the status of the handshake and the anxiety created by the partial lockdown to contain COVID-19, which has angered some Kenyans,” a source told The Standard.

Following the meeting the duo agreed to make a public appearance together.

On Thursday, April 1, Uhuru and Raila inspected various development projects in Nairobi County including the Green Park Bus Terminus at the Railways Club.

Uhuru and Raila who were dressed casually were taken around the nearly half-finished park that has already been fitted with shades and eats for commuters to sit as they wait for their rides.

READ ALSO  Kenya's High Court 'stops Reggae,' rules that Uhuru can be sued even while in office
Related Topics:Uhuru Kenyatta
Up Next