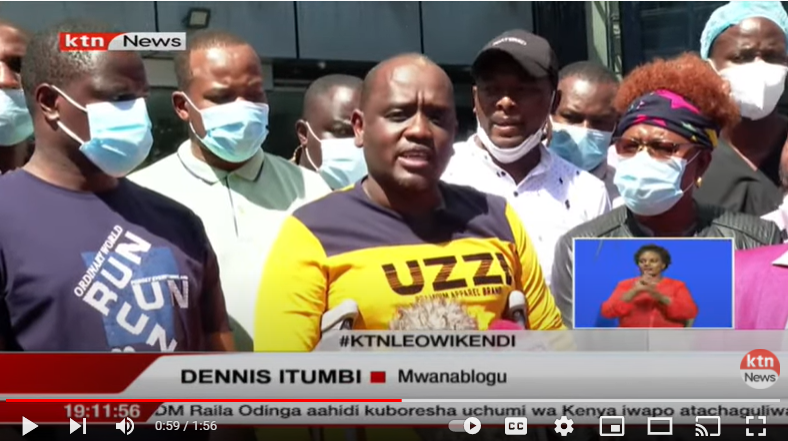 Political activist Dennis Itumbi was discharged from Nairobi West Hospital on January 1, 2022, where he had been admitted, nine days after being checked in with injuries sustained during an alleged abduction.

Speaking on Saturday at the Nairobi West hospital where he has spent the past week, Itumbi said he was now ‘fit’ and ready to go out and fight as he recuperates from home.

“Ten days ago, I was in serious pain, I could not open my eyes. In fact, I did not think ten days later I’d be standing here addressing you,” a crutch-wielding Itumbi told journalists.

“I walk out of the wards a fit man to go and battle,” he added.

Itumbi maintained that he was unshaken by the alleged abductors he claims were sent by top government officials to intimidate him, adding that his loyalty to DP Ruto’s camp remains.

“I am unshaken and my belief in the Hustler Nation remains strong and undiluted,” stated Itumbi.

He added that he had forgiven the unnamed ‘big men’ for now but, however, stated that he would give his complete account of events surrounding the December 23 incident in due time.

“In the second week of February, I will be going to a small church in Kirinyaga to go and give a thanksgiving service. We are going to give this story as it was,” Itumbi affirmed.

DP Ruto recently came out to address the incident, terming Itumbi’s tribulations as “the result of torture by people who should have been there to protect him and us all.”

“They have now turned violent & fatalistic after all the negative narratives, threats and blackmail against us failed… They wanted to kill his spirit but DI is strong and in very high spirits though doctors say he will be confined to bed for a month,” tweeted the DP after visiting Itumbi in hospital on Tuesday.

Itumbi was reportedly picked up by unknown men at Thindigua, Kiambu County and forced into a Toyota Premio after leaving a barbershop.

“My brother has been badly beaten. We thank God that he is alive. On his own account, he was arrested by police and beaten and tortured. This is the state we found him in. Please pray for his recovery,” wrote David on Friday, along with photos of Itumbi in a hospital bed with a bandaged arm and legs.

“The criminal squad handcuffed him from behind and tied his limbs with a rope. They told him why they were arresting him and added that he will be interrogated by the boss, who he will have to support,” Senator Kihika said during the presser.

Itumbi was allegedly later bundled out of the moving vehicle and left for dead at a deserted location where boda boda operators and a taxi driver came to his aid after positively identifying him.

“The doctors have said I am out of danger, I will only be going back to the hospital for normal clinics,” he said.

The blogger has been responding well to treatment and recovering from the injuries inflicted by attackers who kidnapped him.

According to Kasarani police chief Peter Mwanzo, Itumbi was discovered with various injuries by boda boda riders in Lucky Summer on the same day.

The operators rushed him to a hospital within Kasarani before being transferred to Nairobi West.