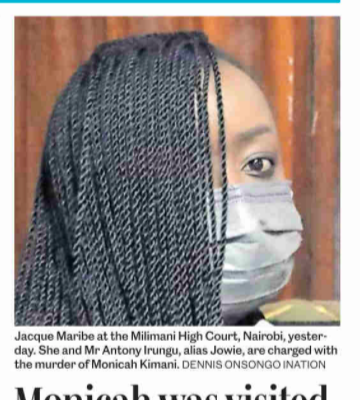 The ongoing murder trial of businesswoman Monica Kimani saw a claim by the prosecution that media personality Jacque Maribe may be going through depression following her trial in the case.

Maribe is charged alongside prime suspect Joseph ‘Jowie’ Irungu in the murder of Kimani.

The prosecution, led by Mwaniki, had told the court that during the previous court session, lawyer Katwa Kigen had indicated that she was depressed because of the time the case has taken.

“We have to know whether the second accused is mentally fit to follow the proceedings and to continue with the trial and confirm that she is not depressed,” Mwaniki told the court.

“If she is not well, we need to have a mental assessment since all the accused have to be mentally fit to continue with the trial.”

The defence lawyer, however, dismissed the allegations, saying Maribe was fit unless the state was seeking an adjournment.