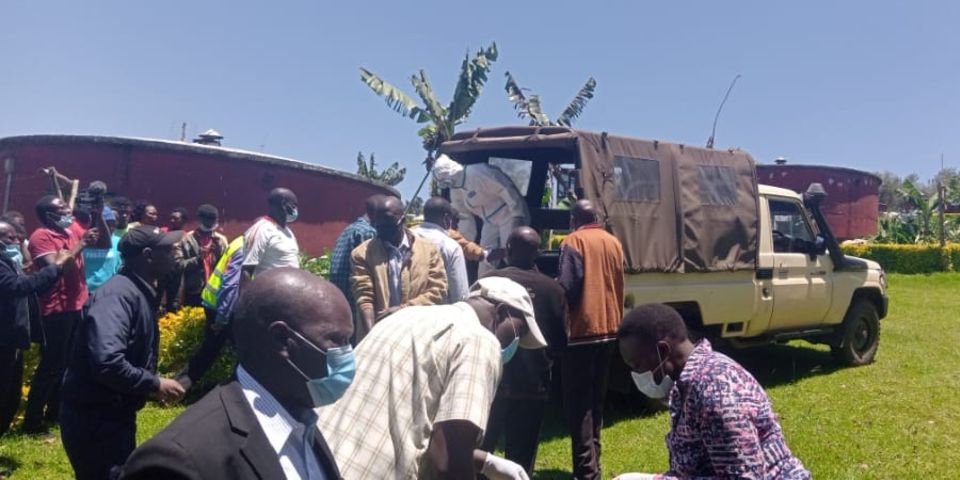 The brutal killing and secret burial of a James Finlay tea company employee has rekindled cases of murders in Kericho County after a calm that lasted about a year.

Police are piecing together circumstances under which the victim – Emmy Chemutai – was allegedly raped, murdered and buried in a shallow grave at Kapsongoi tea estate.

The body was exhumed on Friday after investigators and residents stumbled on a freshly dug grave a day earlier, two weeks after the resident of Kiptenden village at Kaptembwo Location in Boito Ward, Bomet County, went missing.

“Two suspects have been arrested in connection with the murder. It is too early to tell exactly what happened prior to the murder but we are making good progress in the investigations,” said Kericho County Police Commander Silas Gichunge.

The incident has caused worry among residents still coming to terms with a series of mind boggling murders that rocked the county for two consecutive years before a major operation was mounted by the police.

A crackdown by a special squad dispatched to Kericho by the Directorate of Criminal Investigations (DCI) over a year ago appeared to have stemmed the recurrence of the murders.

“It is important for police to get to the bottom of this murder as it has instilled fear in residents who say the criminals who operated in the region have regrouped,” said Mr Titus Korir, a resident.

Mr Gichunge said, “Emmy’s murder is not connected to past incidents. We are treating it as an isolated care. I can confirm that we have dealt with and broken a criminal gang that terrorised the residents in the past.”

Kericho Woman Representative Florence Bore noted the need for sterner police action to curb increasing cases of murder and violence against women in the region.

“That a woman has to die in the hands of criminals the way Emmy did is unfortunate, especially after a series of murders in the past,” said Mrs Bore.

She said the recurrence should be nipped in the bud to restore the people’s confidence in the security arms of government.

“People need to be assured that they can go about their businesses at any time without fear of attacks. It is a matter that needs immediate attention and action by relevant government departments,” said Kapsoi Ward Representative, Mr Paul Chirchir.

The last high profile case was that of the killing of Rai Cement Factory General Manager Chetan Vyas in Kericho County on September 22, 2019.

Mr Vyas, 50 was murdered by three people who scaled the walls of the factory and accessed his house by breaking in through the roof after disabling CCTV cameras at the factory in Soin Sigowet Sub-county on the border of Kericho and Kisumu counties.

The suspects were however captured by CCTV cameras in the house as they broke in, entered the bedroom and strangled the victim after tying up his legs and hands. They carted away six gunny bags with unknown contents.

Director of Criminal investigations George Kinoti said at the time that suspects were arrested following extensive forensic investigations at the scene of crime.

More than 11 suspects including foreigners were arrested.

In another incident, police officer Festus Kiptabut Ngetich was arrested and charged with the murder of a colleague’s wife – Irene Chebet – on July 12, 2018 at Jambo village in Kipkelion, Kericho.

Mr Ngetich and other police officers reportedly stormed the home in an attempt to arrest Chebet’s husband, Justus Too, for unexplained reasons.

Chebet, who was pregnant, was shot at close range and died at the scene.

The policeman pleaded not guilty to the charge.

Four other officers – Samwel Lolngojine, Alfred Tanui, Isaac Mwangirwa and Douglas Mwendwa – were arrested and charged with collecting and disposing of spent cartridges at the scene of the murder. They also denied the charge.

And in a baffling turn of events, Chebet’s husband was murdered on July, 12, 2019 at Kaplaba village in Kipkelion East constituency.

Three suspects were arrested and a case opened. It is yet to be concluded.

The murder of a couple – Benard Kipkirui Langat, Ms Adija Cherotich – and their five year old son at Matobo village in Ainamoi constituency on April, 1, 2019 is still the talk of the region.

They are accused of committing the offence while armed with a claw hammer, machetes, swords, a spanner, chisel, a screwdriver and wooden logs.

They robbed the family of money, ATM cards and other valuables.