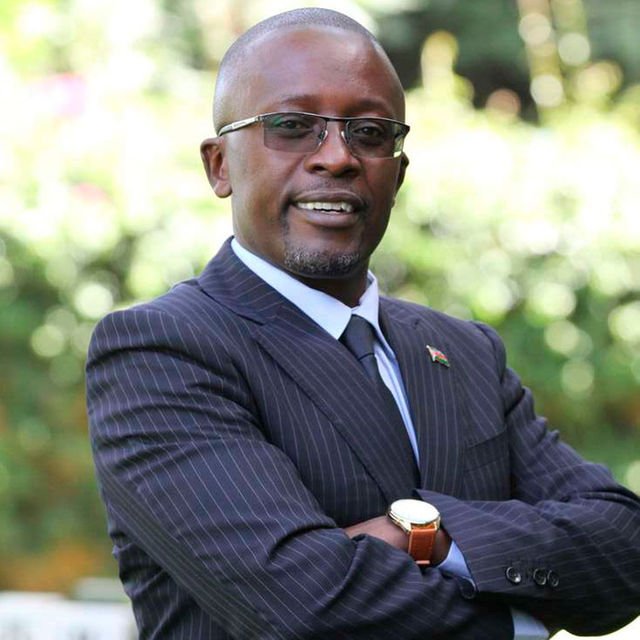 Jaoko Oburu Odinga says he prefers to keep a low profile – not an easy thing for somebody who comes from one of Kenya’s most prominent political families.

As the 50-year-old settles down for the interview with Lifestyle in Nairobi, having travelled from his base in Siaya, where he is the Roads and Public Works Executive,  the son of politician Oburu Odinga gives no hint that he is about to reveal some of his most intimate personal experiences.

Growing up under President Daniel arap Moi’s dictatorial one-party regime, being an Odinga meant your every move was monitored by State agencies.

When Jaoko was a little boy living with his father in Kisumu, he recalls encountering some mean-looking people who came to their home and carted away all household items.

“At that time, I didn’t realise what the matter was. I can only remember having an empty sitting room and as children we poured soapy water on the floor and had great fun sliding,” he says.

He remembers that on the fateful day, auctioneers, without warning, invaded his father’s home  to seize property to pay for a bank loan. The money had been taken by Jaoko’s grandfather, the iconic politician Jaramogi Oginga Odinga, for his transport firm, Lolwe Bus Company.

Jaoko’s father was targeted because he was the company’s managing director. The only problem, says Jaoko, was that the bank loan that triggered the auctioneer’s action was not due and had been recalled by the bank prematurely due to political pressure after Jaramogi rubbed the government the wrong way.

Jaoko also recalls how the regime hunted down Jaramogi and never wanted him to hold meetings. On one such day, a young Jaoko was used as a decoy. He wore the trademark Jaramogi hat and slumped on the backseat of his grandfather’s car with the security agencies believing it was Jaramogi himself in the car.

The decoy worked as security agents from the Special Branch (now National Intelligence Service) monitoring Jaramogi’s movements thought the grand old man had left. By the time they realised it wasn’t Jaramogi in the car, his meeting with some progressive political leaders had ended.

At 18 years, Jaoko says, he applied for a national identity card, a routine for many people his age.

“When I applied for my ID the first time, there was no response. I attempted through my dad to get a friend at the registration bureau in Kisumu but to no avail. I gave up,” says Jaoko.

He had just returned from his schooling in Zimbabwe and had applied for undergraduate programmes in India and Canada.

A few years earlier, President Moi’s government had introduced the 8-4-4 education system in 1984, but Jaoko had wanted to continue with the old British curriculum.

His auntie, Beryl Achieng’, who had just divorced the flamboyant Gem MP Otieno Ambala, had then moved to Zimbabwe.

“Zimbabwe had got independence a few years earlier from the British and the freshly formed government was keen to keep high standards of education and so I was happy to leave with her (aunty),” says Jaoko.

With some luck, he secured his passport and that enabled him to fly out of the country to study in Canada at St Mary’s University.

Jaoko would only get his Kenyan national ID in 2007 and voted for the very first time after he returned from Canada.

He had the option of going to India, which is what his father could afford, but the Canadian option offered Jaoko an opportunity to work and raise money for his upkeep and tuition fees.

“I yearned for financial independence from my parents,” he says.

The university years also gave him a break from the government’s intense scrutiny of his family.

He recalls that he and his siblings grew up with the knowledge that a loose tongue could land their parents in trouble. So, they learnt early to stay away from trouble by keeping a low-profile.

“On my way to Canada, as I approached the boarding area at JKIA (Jomo Kenyatta International airport), an official told me to leave all the Kenya shillings that I had been given by my grandfather (Jaramogi) to buy some clothes,” he says.

For the first time in his life, an intelligence officer, who it appeared had been trailing him, did a good deed and helped him change the currency into dollars just a few minutes to take-off.

In Canada, as he started his Bachelor of Commerce degree majoring in Accounting and Finance, Jaoko formed a close circle of friends. They studied hard, worked hard and played hard.

Life wasn’t easy and sometimes they had to live on bread and water for weeks, says Jaoko.

They had to look for menial jobs, with the favourite being washing dishes, which earned them slightly over $5.50 per hour.

Others in his circle of friends at the time were Kenyans Douglas Obare and Amos Nyalwanda, Charles Guy Lee from Mozambique, and Boris Mischikoz from Bulgaria.

“While in Canada, this (slightly more than $5 per hour) was a minimum wage. Compared to what folks earned back at home, this was good bread. We were ready to go,” says Jaoko, adding that at some point he slept three or four hours a night.

He graduated with honours in 1997 – the year Kenyans were having a general election under President Moi’s government – and brought to life a business idea he had been mulling over: Trading in cultural artefacts and materials.

Initially, he started importing his wares from Zimbabwe. As the business grew, he got more artefacts from Kenya and Tanzania.

His outfit –  AfrikBatik based in eastern Canada, Nova Scotia province and Halifax city – was the only black-owned shop of its kind in the region.

With this came a steady flow of good cash — with disastrous consequences. Jaoko says he soon realised he was becoming an alcoholic as bars became his favourite places to hang out.

“The situation was so bad that my girlfriend Joan and I moved to an area outside the town so as to avoid the joints and some of my friends,” he says.

But he knew he needed to do something about this as the drinking continued.

“My life depended on this decision,” he says.

A friend convinced him to join alcoholic anonymous (AA) for help.

He went to rehab, where he met people in a situation similar to – or worse – than his.

“At AA, everyone was equal and we didn’t even introduce ourselves by our names; we were simply anonymous,” he says.

It was a struggle to avoid relapsing.

“I had my own doubts about my resolve to leave the bottle. But I tried my best because at that point I doubted if I had any option left If I were to have a life and a future,” he says.

His ultimate test came on December 31, 1999 ahead of the iconic year 2,000, when people travelled from across Canada for what some said would be “the party of the century”.

There was also the theory that computer systems would go crazy or, worse still, that the world would end at midnight.

“Well, my world of drinking ended when I surrendered and donated my ticket to a friend to attend the party. Had I gone, I would have drunk myself silly and I would have eventually died from alcoholism,” Jaoko says.

Today, he is a staunch Christian, who worships at Winners Chapel.

Back to his story in Canada. With the alcohol problem behind him, his business thrived. He went beyond merely selling artefacts to explaining to clients the significance and meaning of whatever piece they were buying. This, he believes, made many Canadians curious to visit Kenya in particular and Africa in general.

It was not long before the Ministry of Education in Nova Scotia noticed this wave of African cultural awareness through his shop and he was asked to give talks in schools. This role as a “cultural ambassador” attracted more clients to his shop.

In 2003, Jaoko met Tia Gosman from the Bahamas and they got married in June that year. The couple later had two children.

In 2006, Jaoko and his wife made a decision to settle in Kenya. It was a decision that changed his life.

The 2007/2008 post-election violence proved to be a turning point. It was not only that his uncle Raila Odinga was the ODM presidential candidate caught up in the dispute over the results that declared PNU’s Mwai Kibaki re-elected as President. It was even more personal.

“I was staying in Kisumu in a house which was less than a kilometre away from Kondele — the epicentre of the violence in the region as police battled with protesters. My wife, who all her life had never seen or experienced first-hand such levels of State-sponsored violence, was shell shocked and scared. She was nearing a mental breakdown and to make matters worse, her parents back in Canada were consuming the frenzy of international media which portrayed Kenya as a killing field,” says Jaoko.

His wife decided she had to return to Canada immediately, and asked him to accompany her. But Jaoko says he did not want to run away from the country’s problems. Instead, he wanted to be part of the solution.

“The violence cruelly and violently split my family as my wife went back to Canada with my two daughters,” he says.

The two effectively parted ways and Jaoko later remarried. He has a son and two daughters from this union.

The resolution of the 2007 violence brought new roles for Jaoko, who has over the years remained politically active around Raila and ODM. In the settlement, the ODM leader became Prime Minister in the Grand Coalition government with President Kibaki.

Jaoko took up more political roles ahead of the 2013 elections. He was part of the youthful team that formed the Friends of Raila pressure group. Others were his longtime friends Agingo Rapemo (treasurer) and Ken Kirimania (chairman). Jaoko became the founding patron.

His experience in this outfit was baptism by fire. He had been naïve, he now says, as people quietly plotted to take over the group.

Soon, a team led by Eliud Owalo and Dick Oneko ganged-up and threw out Jaoko and his group out of the outfit. This, though painful, was a lesson how not to run a political organisation.

Jaoko is quick to dismiss the Dynasty vs Hustler narrative – pushed by Deputy President William Ruto – and warns that it will end up creating deep divisions.

He says given his background of struggle and the baggage of State persecution meted out on the Odingas for decades, it is unfair for anybody to refer to his family as privileged.

“We have worked hard and one of our hallmarks is integrity and dignity. Whatever we have, we have earned through the sweat of our brows,” he says.

He is also in the process of forming a new movement to mobilise youth support the Building Bridges Initiative.

So, what are his political ambitions and is he soon taking the baton from his father or his uncle?

“God’s time is the best time. When that time comes I will be running for political office but for now I am grateful I have been given an opportunity to serve the people of Siaya as a CEC and while at the same time mobilising young people to march forward with the BBI,” he says.