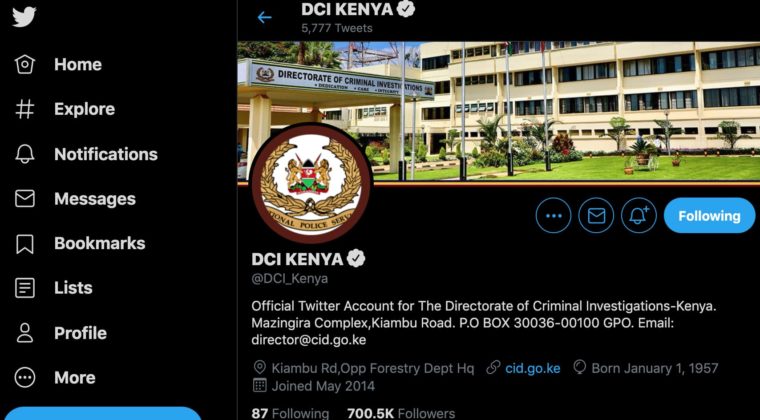 John Kimani is the man who has got netizens talking about the creative tweets posted by the Directorate of Criminal Investigations (DCI).

The 29-year-old was on Monday featured in the Washington Post with his tweets likened to a crime novel.

“…the language only becomes more florid, even Shakespearean,” the American daily newspaper said.

It further describes Kimani’s writing as ‘titillating’ and with a ‘penchant for scandal’.

The DCI Twitter account currently has slightly over 700,000 followers and the recent change of tack in using engaging language seems to have elicited more followers.

In his interview with the Washington Post, Kimani said: “What I’ve learned is that people want thrills. You must feed your followers. That’s how the word gets out.”

He intimated that he once dreamt of becoming a journalist and it is his interest in writing that has enabled him to start changing the image of the DCI.

And according to DCI boss George Kinoti, a new online strategy was necessary because police in Kenya have been perceived as killers since colonial days.

He told the Washington Post that he and his team intend to restore the confidence of Kenyans in the police in their ability to fight crime.