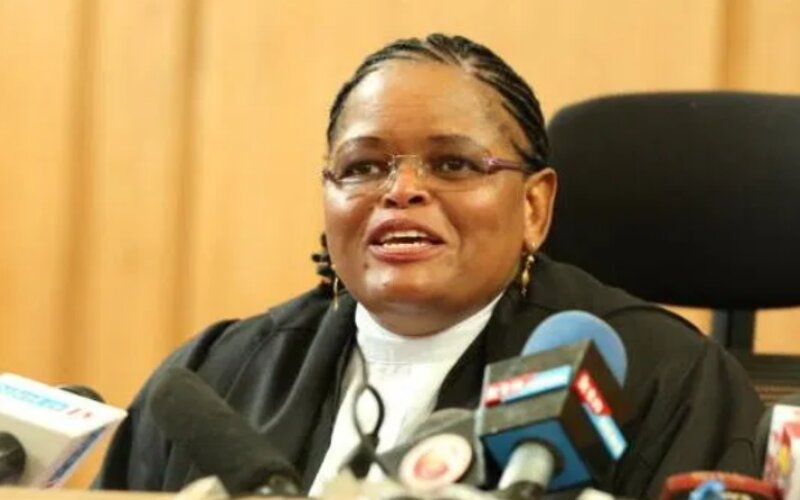 Her name will be forwaded to President Uhuru Kenyatta for approval, and, thereafter, submitted to the National Assembly for vetting.

The Judicial Service Commission (JSC) announced on Tuesday that Koome, 61, emerged the best candidate out of the ten applicants for the position.

The announcement was made by JSC Chairperson, Prof. Olive Mugenda, in a brief address to journalists on Tuesday evening.

Her confirmation came barely hours after the Court of Appeal overturned a lower court’s ruling, which had barred the JSC from announcing the CJ contest winner pending determination of a petition.

Four petitioners had moved to court and successfully stopped the JSC process, arguing all the ten CJ seat applicants had not submitted their wealth declaration forms as required.

The Appellate Court ruled that the High Court lacked jurisdiction to hear the matter.

Martha Koome was up against legal giants, among them scholars, judges and seasoned lawyers.

In 2016, Koome took a stab at the Deputy Chief Justice position, but wasn’t successful.

After she went for the CJ seat – this time around – Koome is a single confirmation away from becoming Kenya’s 15th Chief Justice.

During her interview, held on April 14, Koome was asked to imagine the challenges she would face if chosen Kenya’s first female Chief Justice, and illustrate how she would manage them.

READ ALSO  Man who was slapped by Lucy Kibaki opens up

In response, she said: “I believe the challenges are similar whether a male or female CJ. It will be historic for the Commission to nominate a woman for the Office of [the] Chief Justice. Leadership is gender-neutral. It doesn’t require a man or woman. It is skills that will deal with the challenges we face. You need managerial skills because you will be overseeing various things. As a lady, I appreciate that everybody brings something to the table.”

On cases taking ages in court, she said she would introduce a case management system that would guide judges and magistrates on which cases to exclusively handle.

“This (Backlog of cases) is a problem and it needs to be solved immediately. Back then, we were few [magistrates and judges] but somehow we managed. Now, we are many, but cannot manage [to clear the backlog]. What needs to happen is for every judge to have their own docket. We need a case management system,” she said.

Koome was also put to task to explain how she would handle the impasse created by President Uhuru Kenyatta’s alleged refusal to swear in 41 judges over alleged integrity issues.

“This [stalemate] must be resolved through negotiations. We are independent as Judiciary and nobody should attempt to take our dependence. Therefore, when the right hand doesn’t agree with what the left hand is doing (Kenyans), the body suffers. When I look at the Judiciary, we are inter-dependent as far as delivery of service is concerned. Where do we come together? We will hold regular meetings with the Executive and Legislature to end the stand-off. We must discuss this issue of the appointment of 41 judges with the President, find out where the problem is and resolve it,” she said.