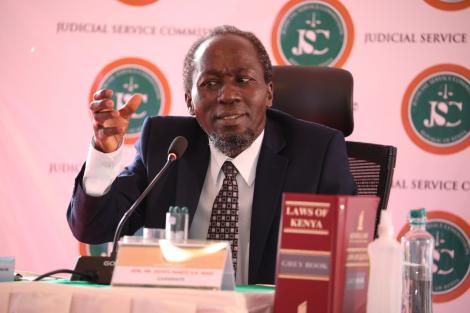 Justice David Matere on Thursday, April 15 explained why he disciplined a court staff who was making noise during a court hearing.

Speaking before the Judicial Service Commission (JSC), the judge defended his actions saying the issue of making noise had become an issue and authorities had tried to handle it using other ways but it did not work.

Matere said during the case, there was so much noise along the corridors to the point that he was not able to continue.

He added that he was forced to send a clerk to bring the person that was making noise and he was finally charged with contempt.

“I stopped the court, deferred proceedings, and dealt with the matter, got the person arrested and brought to court and I said put him in and we resumed court,” he said.

Marete has over 30 years of experience in the legal profession and was appointed as a Judge of the Employment and Labor Relations Court (ELRC) in 2012.

READ ALSO  Here's how to Apply for Canada Visa programs 2022/2023
Related Topics:David MaretemareteNews
Up Next