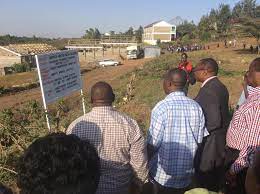 The residents of Ole Kasasi Kajiado County have petitioned the County government to investigate the death of a student of Nazarene University who passed on in February while riding a motorbike.

The 25-year-old Douglas Kimathi, died a sudden and early death as he was riding a motorbike and hit a road bump that was illegally erected by private citizens along the dusty and abandoned road engineering of Ole Kasasi road.

Until his death, Douglas was a young family man, a fourth year and hard-working proprietor of an Agro-vet shop in Ole Kasasi.

On this day he was riding a motorbike and was unaware that a bump had been erected during the day.

He lost his life and left behind a distraught young wife and his bewildered four-year-old daughter.

The abandoned 11 Kilometre  engineering of Ole Kasasi road is a violation of the civil rights of thousands of residents and road users, including users of the Ongata Rongai SGR Railway station, the Nazarene university, a number of colleges, a significant number of residential hotels, restaurants, and a large number of schools and places of worship.

“The engineers have abandoned the road since 2019 and left it in a dangerous and unsanitary state with dust pollution rising into classrooms and chocking children as they walk to school. The road is also a polluted and dangerous watery and muddy mess in the rainy season. The state of the road includes unfinished culverts, dangerous trenches, construction rubble, and other dangerous debri. The completion of Ole Kasasi road will provide a safe passage to thousands of school children, safety for motorists and pedestrians, quick emergency road evacuation, and promote the commercial activities of the Ole Kasasi area and its environs,” said Collins Oluoch, a resident at Ole Kasasi and one of the petitioner.

He added that no other person must die a death caused by the abandoned engineering of Ole Kasasi road.

The residents also called on the Governor of Kajiado County, to immediately commission an audit of the status of Ole Kasasi road, an inquiry into the death of Douglas Kimathi, and institute the completion of the road.