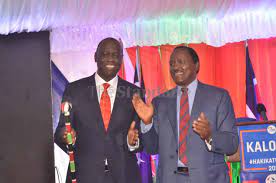 Azimio La Umoja One Kenya coalition has suffered a big loss following the exit of the Wiper Party led by Kalonzo Musyoka from the bloc.

Kalonzo ditched the coalition after it settled on Karua, a position he was also eyeing.

Speaking at the Wiper Party headquarters in Karen on Monday, Kalonzo unveiled Andrew Sunkuli his running mate to wrestle with the two main contestants DP William Ruto and Raila.

“Although the imminent persons had done their work, the final decision has been taken by the candidate himself (Raila Odinga), which I respect. I wish him and his running mate, my sister Martha Karua the best. I know my country well. That decision will be met by overwhelming opposition. Therefore, we have agreed to go our separate ways and compare notes as we move,” he further stated.

He wondered why he would be exposed to a panel to vet his suitability when he had previously flown the flag without being vetted.

However, he attended the interviews the next day explaining that skipping them would have given his detractors the excuse they needed to edge him out of the running mate race.

He added he had not struck any deal with Deputy President William Ruto whom he accused of corruption. [Ruto is the presidential candidate for Kenya Kwanza.