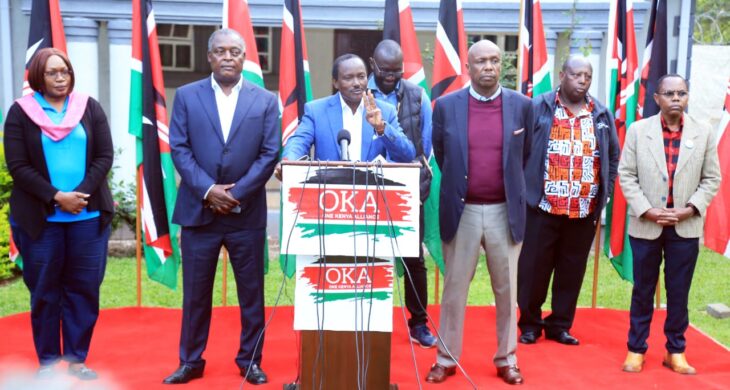 Kalonzo Musyoka, the Wiper party leader, is getting closer to reaching an agreement with the Azimio la Umoja team, which includes President Uhuru Kenyatta and former Prime Minister Raila Odinga.

Musyoka disclosed that OKA linked parties have begun open and organized communication with like-minded political formations such as the Jubilee Coalition and the ODM Party during a news conference on Friday, February 25.

OKA was also open to the formation of a grand coalition called Azimio-One Kenya Alliance, according to Musyoka.

Musyoka added that the political parties affiliated with OKA (Wiper, Narc Kenya, UDP, and Kanu) had a comprehensive discussion and chose to work with the Jubilee Coalition and the ODM Party to carry the country forward.

He went on to say that OKA was interested in creating a grand alliance with Uhuru and Raila’s teams based on three pillars.

“The alliance shall be anchored on three equal pillars. As OKA we firmly believe in an open, honest and structured dialogue whose basis is a promotion of national unity, upholding and respecting the dignity of all Kenyans, ending the culture of graft and impunity and restoring the decency of living within our borders,” Musyoka stated.

OKA’s presidential flagbearer will also be unveiled, according to Musyoka.

Musyoka came clean earlier this week about a meeting he had with Raila Odinga on Sunday, February 20 at a hotel in Mombasa County.

According to Kalonzo, the meeting was not scheduled in advance and that he met Raila by coincidence. His speech came after photographs of the two leaders in meaningful discussion.