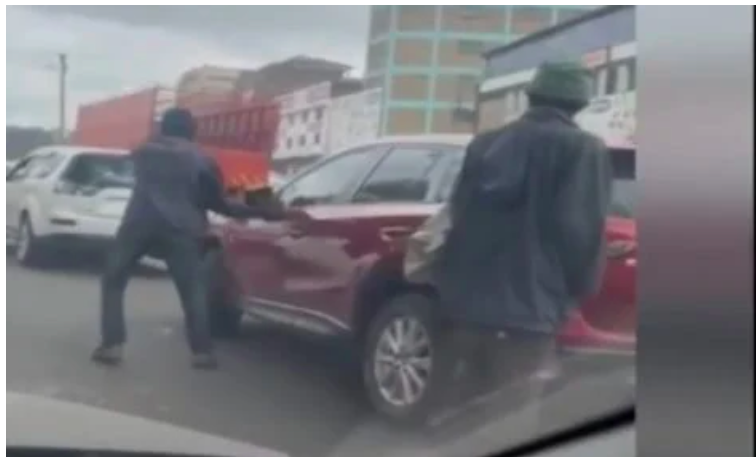 Police in Nairobi say they have arrested a man who was filmed attempting to steal a side mirror from a car that was stuck in traffic.

The suspect was captured on a video clip that was shared on social media by another motorist who was behind the targeted vehicle.

In the clip seen by Nairobi News, the suspect attempts to steal the side mirror from a red car that is holed up in traffic.

But his efforts are not successful. For some reason, he appears to panic and is seen running away and disappearing into the traffic snarl-up ahead.

But on Friday, the suspect who was paraded in front of the media at Kamukunji police station.

Police did not disclose how they managed to track and arrest him.

The man is however heard denying he is, indeed, the one.

The theft of side mirrors, wheel caps, wind visors, and car lights has become commonplace within Nairobi, and specifically when there is high traffic.

With the perennial traffic jams in Nairobi, drivers are forced to keep their windows closed, even when it is hot outside.

Police say spare parts thefts are most common along the Globe Cinema roundabout in Nairobi’s CBD.

“We want to clean this city completely. We will arrest and take the criminals to court, but if any of them is armed and defies orders to surrender, my officers are under instructions to shoot,” said Nairobi Central Sub-County Police Commander John Nyamu.

At the same time, Nairobi County police commander Augustine Nthumbi said that several police officers including a special team of sleuths have been deployed to look into the rising cases of muggings and robberies in the city.

He said that the multi-agency team has been instituted to deal with the crime rate within the city and its environs.

The announcement by the county police commander follows public outcry over increased robberies within the city some of which occur during the day.

Nthumbi said plainclothes officers have been given orders to address the increased crime rate within the shortest time possible.

The police commander added that his officers have widened their nets to also capture criminals who are running kidnappings within the city and her environs.

Bodaboda operators were also put on notice and warned against taking part in criminal activities.

Related Topics:NewsSide mirror thief
Up Next