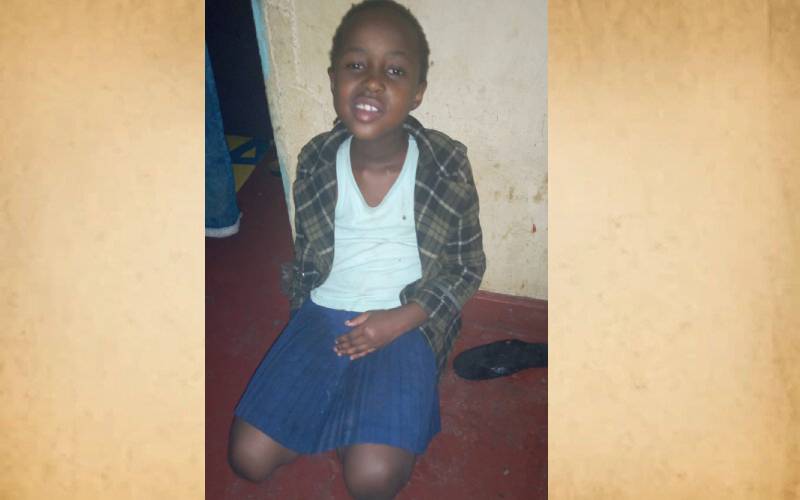 A couple from Kayole in Nairobi is seeking answers after their 8-year-old daughter died in circumstances they are yet to understand.

The child, Michelle Jennifer, had reported to school in Soweto on Wednesday, but did not return home that evening.

Her parents inquired about the minor’s whereabouts, but no clear information was given by the girl’s school, prompting them to file a missing child’s report.

After word went round that Jennifer was missing, police traced the girl to Mama Lucy Hospital.

However, the law enforcement officers were informed that the child, who had already been pronounced dead, was brought to the facility by unknown people.

The officers thereafter informed the girl’s mother, Linda Achieng, about the discovery.

The only information shared with her, was that “a middle-aged couple” were the ones who took the minor to hospital “while unconscious”. The identities of the two remain unestablished.

Achieng said she took her daughter, Michelle Jennifer, to school, a private learning institution in Soweto, on Wednesday morning, May 19.

The youthful mother, thereafter, returned home, prepared and left for college. She is pursuing a course in computer studies at institution located in Nairobi’s central business district.

“When I returned home at 5pm, I discovered my child hadn’t arrived yet. That was so uncharacteristic of her,” Achieng told The Standard.

The worried mother looked for her child in most houses in the neighbourhood, but the search was unsuccessful.

“The following morning (Thursday, May 20), I received a call from one of the police officers at Soweto informing me that my daughter had been traced to Mama Lucy Hospital,” she said.

“I was praying and hoping that my little girl was alive.”

Achieng said when she went to the hospital, a medical doctor told her that the child was taken to the facility at 5pm Wednesday by two middle-aged persons, a man and a woman, who did not leave behind any identification documents.

The doctor claimed the couple left the child at the reception.

The girl’s father, Ayub Owino, visited her school on Friday, May 21, where he was allegedly informed that the minor collapsed at the school on Wednesday evening, and was rushed to the nearby Mama Lucy Hospital.

Owino said despite the school’s administration claiming they took the child to hospital while alive, Mama Lucy Hospital alleges the minor had already died when she was brought to the facility.

“We just want to know whose negligence led to our daughter’s death,” said Owino.

The Standard has reached both Mama Lucy Hospital and Jennifer’s school for comment.

A letter by Mama Lucy Hospital, seen by The Standard, claims the girl was brought to the hospital from a private school in Kayole while already dead.

The inconsistency on how the hospital knew the girl was brought in from the school, yet they couldn’t identify the persons who brought her to the facility, is what police are seeking to investigate.

Visita: I was not admitted, I needed money for rent after sleeping in studio for months