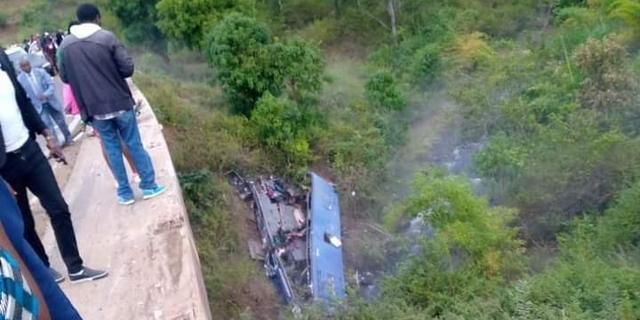 The Modern Coast bus, which was involved in the disaster at the infamous Nithi bridge in Tharaka Nithi County that has so far claimed 34 lives, is not new to controversy.

Following the incident, the company revealed that the bus’s registration number is KCF 614U. This is the same bus that has been driven recklessly on multiple occasions on other highways, prompting passengers to call for its removal from the road.

It has been the subject of complaints since at least 2016, including hitting a stationary truck on the Mombasa-Malindi highway in December 2017, being involved in a fatal accident close to Malindi Airport in April 2017, honking loudly in the middle of traffic, and driving without backlights in December 2016.

The second one was KCF 614U by Modern Coast. Hit a stationery truck on the Msa-Mld highway. One fatality in the driver. The bus was refabbed by Banbros and is back on the road

The driver of a Modern Coast bus was fired in December 2016 after a viral video showed the bus overlapping and driving downhill in the wrong lane at the notorious Nithi Bridge black spot.

The firm also made a public apology, stating that they had submitted the driver for license cancellation to the National Transport and Safety Authority (NTSA).

@KenyanTraffic. KCF 614U this bus should not be on the road, moderncoast

A Modern Coast, two trucks, and a land cruiser traveling from Nairobi to Kampala were among the more than 13 vehicles that were involved in a sequence of collisions at the notorious Sachangwan blackspot on the Nakuru-Eldoret highway in 2017, which resulted in over 15 fatalities.

Presidential debate still on despite Raila Odinga’s threats to skip