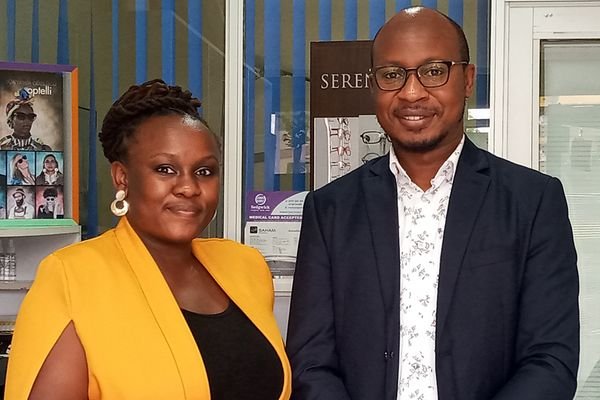 Would you go into business with your brother or sister? Before you read any further, think about Warner Bros, the Wright brothers, the McDonald brothers, the Kellogg brothers and the Disney brothers. These are a few examples of famous siblings who worked together to build business empires.

Clearly, when siblings work together, they can revolutionise industries. The Wright brothers were crowned as the godfathers of aviation after inventing the first plane. The Kellogg brothers changed the meaning of breakfast through their cornflakes while the McDonalds redefined fast food.

But if working with your siblings was easy, we would all be in family businesses. It takes certain elements to make this arrangement work and no one can tell it better than Dennis Michira and his sister, Gloria Michira.

“When I was young, I experienced blurred vision. With the stigma associated with wearing corrective glasses and limited access to eye care, I struggled, especially with studies. This is one of the reasons I decided to become an optometrist,” he explains.

His passion was further fanned after interning at Sabatia Eye Hospital in Vihiga County.

“At the hospital, some patients would profess how better eyesight changed their lives. Some men would even confess jokingly to having married more wives, thanks to better eyesight.”

In 2011, Dennis, graduated from the Kenya Medical Training College with high expectations. He dreamt of getting settled into the job market and living a comfortable life. After a number of job applications, he realised the job market was not as rosy as he imagined.

At the time, optometrists were new entrants in Kenya’s medical field. At the time he graduated, the government had not fully established their place in medical institutions. Despite his aspirations of being a driver for change, the vehicle to fulfilling this dream was seemingly elusive.

Four years of a futile job hunt prompted Dennis to take a leap of faith and open an optical clinic. He wanted to establish a space that catered to all people with eyesight problems regardless of age or social class. But as with any business, unforeseen challenges can throw one out of the entrepreneur’s club. For Dennis, it only took six months for his clinic to fold.

“An eye clinic is capital-intensive and my financial muscle at the time was constrained. Besides, I was juggling entrepreneurship with full-time employment, meaning I barely had time to supervise employees or streamline business processes,” he explains.

Despite closing down, his resilience wouldn’t allow him to just move on. In 2016, he opened a second clinic in partnership with others. This time round, everything seemed in order and the partnerships would cushion him from several risks, or so he thought.

However, the boisterous waters of entrepreneurship threw him another curve ball. He was barely making any money, yet he invested his hard-earned cash into the business. The partnerships didn’t work out as he anticipated. Again, he closed down and was back to the drawing board.

In October 2017, he was at it again. He opened the Dynamic Optical and Diagnostics eye clinic. Past experience had equipped him with tough but important lessons. These lessons would come in handy in steering his third venture to success. But there was one peculiar addition to the business; his sister Gloria, a communications and PR practitioner.

Gloria graduated from university in 2016 and started looking for a job. She was working in the creative industry when her brother asked her to partner with him and run the business.

“I’ve always looked up to my brother and I trust his judgement. So, when he requested me to join him in business, it was a no-brainer for me,” says Gloria.

The two defined their goals and decided that Gloria would handle communications, customer service marketing and related administrative roles. Dennis, being the optical expert was to take care of service delivery and any technicalities that arose. They would then outsource other professional when the need arose.

In no time, Gloria learnt the ins and outs of running an optical clinic and settled in. The partnership was to last for a year, during which they would stabilise the business before bringing on board other employees and partners.

Three years down the line, the partnership is still on. The two have encountered and tackled some of the toughest challenges any business can withstand. In 2019 for instance, the Ngong Road, which their clinic overlooks, was under construction for the entire year and that meant limited visibility and exposure to potential clients.

In 2020, the Covid-19 pandemic checked in. Gloria admits that the pandemic year was the most difficult for them but they managed to stay afloat.

But what does it take to maintain a healthy business partnership with a sibling? History proves that working with a sibling isn’t always a bed of roses. Things can work out perfectly or turn very sour, very fast.

Gloria and Dennis attribute their success to a number of factors. First, their skillsets and personalities are complementary.

Gloria describes herself as a highly structured, organised and creative introvert. Dennis on the other hand is more social, compassionate, industrious, optimistic and a caretaker. While Dennis’ compassion and socialising skills attract clients, Gloria’s structured approach to business helps create a professional environment for the business to thrive.

Professionalism and being able to separate work from family matters also helps. This entails simple things like how they introduce themselves to partners or when they plug in and out of work.

For instance, Gloria notes that sometimes when people learn that they’re siblings, they become more casual and less professional. It’s therefore better to just refer to each other as business partners during formal meetings.

She adds that, “we always try to deal with business matters at the office and once we go home, we avoid discussing or taking work home. This creates a very balanced dynamic.”

Like other siblings, Gloria and Dennis disagree from time to time, but it’s their resolution methods that matter.

Unresolved conflict can severe very successful sibling partnerships. The most publicized example was the Kellogg brothers’ legal battle. They’re famed for inventing cornflakes but upon hitting commercial success, they couldn’t agree on who invented the food product.

They engaged in legal battles for over 10 years, and in one of the cases, they fought over the business name Kellogg, which was also their surname. In the end, they parted bitterly as business partners and as brothers.

Their background history, however, shows that the problem was bigger than the name or credit for invention. They had unresolved conflicts all along and a possibly toxic relationship.

Clearly, conflict resolution is critical when it comes to sibling partnerships. Rather than holding grudges or piling up issues, Gloria and Dennis try to find a solution within the shortest time possible. Their family background is also a plus on matters conflict.

“Our family is very small and close-knit. We’re just two siblings and we’ve always been calm and amicable whenever conflict arises,” explains Gloria.

Their communication skills also come in handy. Dennis, for instance, prefers to analyse situations before reacting. Being the managing director at the clinic, as well as the older sibling, he may easily exercise authority but he prefers to approach issues logically, rather than authoritatively.

Overall, both admit that their partnership has been a rewarding experience. Working together means more family time, given that as family members grow older, they drift apart. It’s also an opportunity for Gloria to learn about entrepreneurship.

“In the past, I interned at an established organisation where everything seemed to run smoothly. After getting into this partnership, I realised that things don’t just happen. They have to be done. I’ve acquired a great sense of responsibility,” says Gloria.

The two have also managed to create an environment where their individual career goals and dreams can be realized, an opportunity employment may not offer.

To any relatives who want to start a business, Dennis says, “establish clear goals from the onset and ensure you’re in agreement. Also don’t force a partnership. Let each member make their independent decision.”

Gloria closes by saying; “separate your personal life from the business and all else will work out.”

Betty Kyallo tells off American actor for claiming that her Best Maid eloped with her husband, sharing her photos