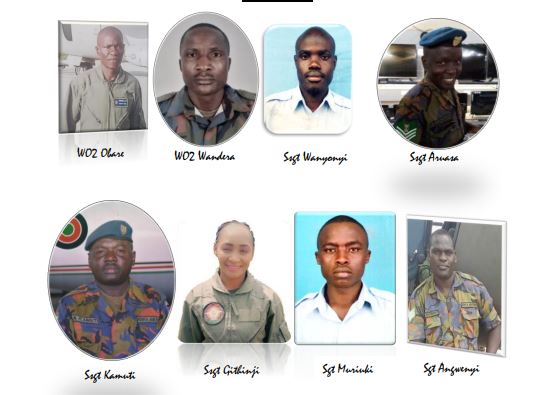 The Kenya Air Force will today (Thursday, July 1) hold a requiem mass for 11 officers who died in a chopper crash at Oltepesi, Kajiado County last Thursday.

The programme seen by The Standard indicates the memorial service will take place at the Moi Air Base Gymnasium, and will run until noon.

“They were devoted, obedient and promising, cheerful and pleasant to work with. The cruel hand of death has robbed us dedicated, loyal, and hardworking Service Members who had a bright future in the Kenya Air Force,” he said.

The military aircraft with 23 occupants aboard crashed on June 24 at Eremet area in Oltinga, Kajiado West.

Kenya Defence Forces (KDF) spokesperson Zipporah Kioko in a statement said that the helicopter was on a training mission when it went down and burst into flames.

President Uhuru Kenyatta visited the recuperating soldiers a day after the crash at the KDF Memorial Hospital in Mbagathi, Nairobi.

KDF, however, continues to remain tight-lipped about the crash, with only two statements sufficing as official communication issued publicly.

The cause of the helicopter accident remains unknown so far.