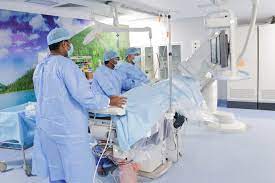 An 83-year-old patient in Nairobi had a unique heart valve transplant process successfully done without surgery.

In Kenya and the area, the transcatheter aortic valve implantation (TAVI) was unique on its own.

The two-hour treatment involved ten experts and cost Sh7 million at Mediheal Hospital in Nairobi. It was done on Fr Brambilla Luigi Carlo, who had been having trouble breathing when climbing stairs or riding his bike.

He was diagnosed with significant Aortic Stenosis due to calcification and blockage in a heart valve. The aortic valve degenerates and does not open correctly as a result of the disorder.

Consequently, the constricted valve makes it difficult for the heart to pump blood. Chest pain and difficulty breathing are two of the signs.

“I was a bit worried. I could not do my normal activities without running short of breath,” said Fr Brambilla, a Catholic priest in Nairobi. “I even collapsed at some point but I am happy these doctors will solve my problem. They tell me that after this I will be 20 years younger.”

Dizzy spells happen as a consequence of the disorder, which can escalate to collapse. The additional force necessary to circulate blood puts a strain on the cardiac muscle, which can result in fluid in the lungs, swollen ankles, and finally cardiac muscle weakness. Aortic stenosis begins to deteriorate if left untreated.

According to Dr Vijaysinh Patil, an interventional cardiologist and the primary consultant, Fr Brambilla’s heart valve was completely obstructed following an echocardiogram. Because “there is a 50 per cent mortality in five years.” the clogged heart valve had to be substituted with a synthetic one.

Dr. Patil said that there are two possibilities for the operation.

He went on to say that because of the patient’s age, “we offered him percutaneous transcatheter aortic valve replacement (TAVR/TAVI) treatment. He was not willing for open heart surgery because of the high risk.”

Being the first in Sub-Saharan Africa entailed overcoming numerous obstacles, such as practicalities of obtaining components such as the heart valve.

The surgery was performed with conscious sedation and local anesthetic. The procedure entailed putting a long tube into the right groin and “implanting the balloon-expandable aortic valve mounted on balloon navigator system.

Stroke, the use of a permanent pacemaker, annular tear, groin bleeding, and occasionally  urgent open-heart surgery are all risks associated with the TAVI technique, which is mainly performed on patients who are too old to have surgery.

Dr. Patil says that urgent open-heart surgery occurs in less than 1% of patients. “We were fortunate that none of these things happened to this patient.”

Fr Brambilla was able to walk six hours later, according to him, and will be monitored for two days before being released.

The success of the unusual treatment, according to Dr. Patil, proves that local doctors have what it takes to cure such conditions without having to travel out of the nation for expensive medical care.