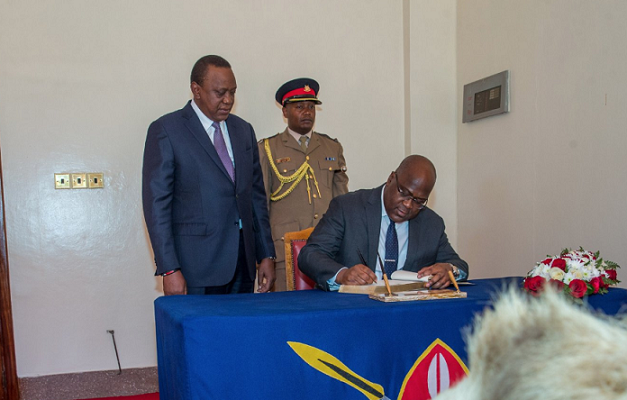 Kenya is preparing to benefit immediately from the accession of the Democratic Republic of the Congo (DRC) to the East African Community (EAC), which investors believe will boost growth by opening up a larger market for products and services.

At a ceremony held on Friday at State House Nairobi, President Felix Tshisekedi of the Democratic Republic of Congo signed the Deed of Accession with EAC Heads of State Summit chair President Uhuru Kenyatta, as required under the EAC admission procedure.

The occasion represented the tenth and last phase in the procedure of admission into the regional bloc, which has now grown the East African region’s consumer market by 90 million people. The Democratic Republic of the Congo joins Kenya, Uganda, Tanzania, South Sudan, Burundi, and Rwanda to form one of Africa’s greatest economic blocs.

The document’s goals include increasing agriculture production in Kenya and the Democratic Republic of Congo, stimulating collaborative business initiatives between private entrepreneurs, and increasing mutually satisfactory trade between the two nations.

The agreement was signed in Nairobi by President Uhuru Kenyatta and his colleague from the Democratic Republic of Congo.

While recognizing the DRC’s significance in the region, President Kenyatta stated that its participation will allow for increased commerce and collaboration.

“The signing will be followed by the immediate removal of all existing non-tariff barriers as well as limitations on the movement of capital, goods, services and people. This will lead to a major increase in intra-EAC trade,” said President Kenyatta.

Kenyan companies have expressed an interest in increasing their investment in the DRC. Equity Group, East Africa’s largest banking group, endorsed a two-week trade mission last year as part of their announcement of proposals to fund Kenyan enterprises looking to open or broaden in the country.

President Tshisekedi said the signing of the deed of admission has solidified DRC’s promises made during the Summit of EAC Heads of State’s entry into the region.

“The move would lead to the consolidation of economic benefits to the peoples of DRC and EAC,” he stated.