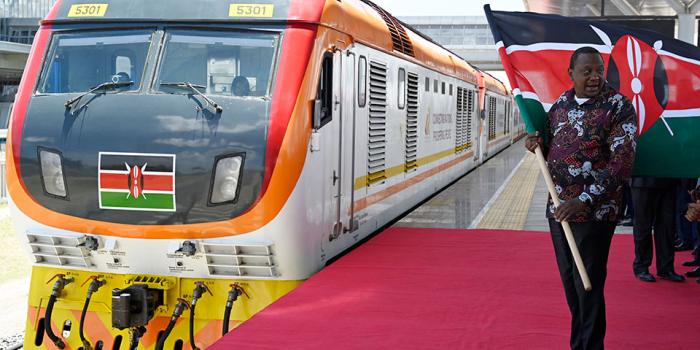 More functions Standard gauge railway functions have been transferred to the Kenya Railways Corporation (KRC) from the Chinese contractor ahead of the final transfer in May, it has emerged.

As part of a pact to completely run activities of the Chinese-funded and built track by May, KRC managing director Philip Mainga has said that the corporation will oversee the loading and offloading of the SGR passenger and cargo trains.

Since March of last year, KRC has been in charge of tickets, security, and fueling.

“The corporation has now assumed the loading and offloading functions from Africa Star Railway Operation Company and in terms of percentages we can say that we are now at 60 percent overally,” said Mr. Mainga in an interview on Thursday.

“The management and the board are determined to see a gradual takeover of operations from AfriStar. We are optimistic that once all staff members from the operator are brought on board, the cost of operation will go down.”

Mr. Mainga sought to mitigate concerns that Kenyan workers stationed at AfriStar are not completely prepared to take over SGR operations in June.

He claimed that the number of Chinese employees at AfriStar has shrunk, with only a few people in charge of important sections remaining.

Kenyan staff currently stationed at AfriStar will be absorbed by KRC once SGR activities resume, according to Mr Mainga, while non-critical Chinese workers would be phased out.

KRC hired AfriStar, a subsidiary of China Road and Bridge Corporation (CRBC), to run and maintain the SGR in 2017.

The operator had the license to service the SGR’s ticketing system, as well as any associated software and hardware operations, under the terms of the contract.

However, in 2020, the Kenyan government secured an agreement with AfriStar to take over operations and maintenance by May 2022. This came after it was discovered that the operator’s payments were unsustainable.

The expense of running the SGR has been a source of concern, with the Transport Ministry reporting that taxpayers spend an average of Sh1 billion each month on just the Mombasa-Nairobi line.

Take A Ride With Me Around Tampa Suburbs.