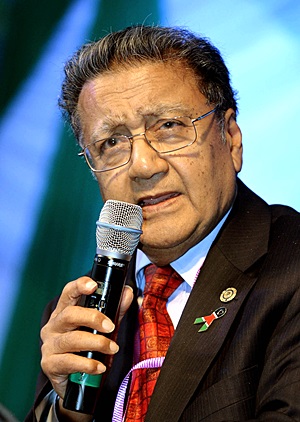 Manu Chandaria, a multibillionaire Kenyan businessman, made history in the US when he was named the first African to receive the Carnegie Medal of Philanthropy.

Chandaria received recognition from the global family of Carnegie institutes for his contribution to tackling global issues through his businesses and the Chandaria Foundation.

The award honors people who significantly contribute to making the world smarter, cleaner, healthier, and more equitable while inspiring others to follow in their footsteps.

“The Chandaria Foundation’s projects have allowed the Chandaria family to create a legacy of healthier and better educated Africans while helping to mobilize and empower new generations of business leaders across the African continent,” the Carnegie Awards noted.

The first Chancellor of the Technical University of Kenya, an industrial expert, was notable for supporting numerous initiatives and serving as a pioneer in the field of education.

“The recipient of six honorary degrees was instrumental in endowing Chandaria School of Business at USIU–Africa and the Chandaria Centre for Performing Arts at the University of Nairobi,” the American organisation stated.

Carnegie praised the Kenyan entrepreneur in particular for his initiatives to advance the nation’s healthcare system and demonstrate compassion for the underprivileged.

READ ALSO  The Sudden Passing Away Of Ruth M Nyoike Of Baltimore MD
Related Topics:CarnegieDiaspora newsManu Chandaria.News
Up Next