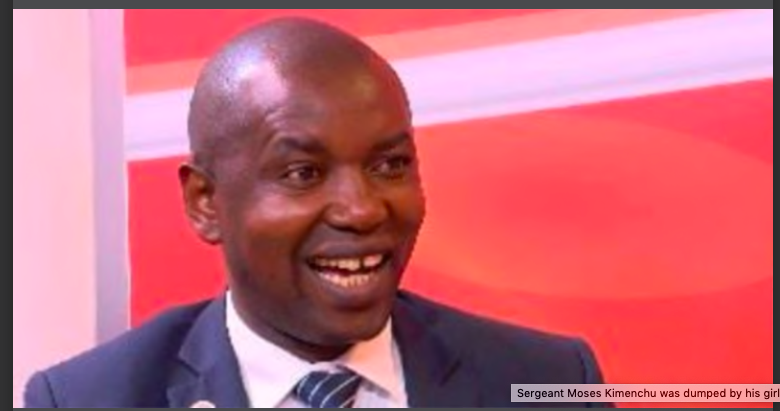 A Kenyan police officer has opened up on how he schooled a lady he was in love with, only for her to dump him.

In an interview with TV 47, Sergeant Moses Kimenchu, popularly known as Sergeant Saviour, said the incident happened after he got a pay rise during the former President Mwai Kibaki’s term.

Recounting the incident, Kimenchu said that he had money to spare and chose to pay college fees for a lady who had won his heart.

He was so serious about their relationship, he planned on making it official.

Kimenchu divulged that he parted ways with KSh 65,000 to enable her to pursue a teaching course.

On top of that, he bought her a bicycle to make her journey to school smoother.

Kimenchu said that on January 2, 2008, he had planned to take her to meet his family.

However, after the Christmas period, she ghosted him.

“Alikuwa mteja (she was unreachable) from December 30. On the day she was to meet my family, I went to her home but no one knew her whereabouts. So I had to surrender,” Kimenchu said.

The dejected cop took the bicycle he had bought her and dumped it in a nearby river. He swore never to date again.

Kimenchu also admitted that he struggled with alcohol addiction from when he was in Class Five but overcame it.

The government recognised the police officer in 2018 for campaigning against drug abuse.

He even has a rehabilitation centre in Murang’a town christened Sergeant Saviour Rehab and Counselling Centre.

In a related story, a man identified as Deji was dumped by his girlfriend despite the many sacrifices he made for her.

Deji got admission into a university for his master’s degree in Canada but his girlfriend told him not to go so as not to put a strain on their relationship.

However, the girlfriend got married to a man in Canada, the same country she asked him not to go to.