Kenyan in diaspora, Brian Mbuvi, competes in the 'Safari Rally.' 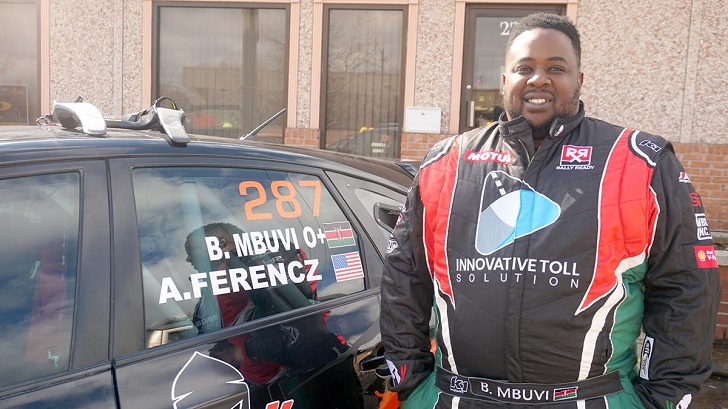 The 100AW was Kenyan Brian Mbuvi’s debut race as a driver (he had previously raced as a co-driver/navigator), and he is the second Kenyan to take part in the event, besides being the first Kenyan to compete in the four-wheel drive category.

His rally team is named Shujaa, which Mbuvi says means “warrior” in Swahili, in homage of the Masai warriors in his home country. “They are some of the world’s last fighters [the traditional way],” Mbuvi remarked.

The Parc Expose in downtown Salem was filled Saturday morning as fans and driver teams gathered in preparation and anticipation of the day’s events. The road rally, which takes place on roads in Dent and Washington counties, attracted participants from across the country and throughout the world, with drivers and co-drivers from from 15 different countries.

When asked what he expects to achieve racing, Mbuvi stated: “to inspire people, to make people see that rally is not out of reach.” Mbuvi believes that his continued progress as a rally driver would serve as an inspiration to people all across the world, particularly Kenyans.

Mbuvi runs his own logistics firm out of Dallas while he is not racing (Texas). And it was via his job that he first learnt about the 100AW, since he was in the region instructing one of his truck drivers at the time.

Mbuvi said he was looking forward to the stages on Saturday because it would give him a chance to make up for a less-than-ideal opening day on Friday.

“I hit a tree at about 60 miles-per-hour,” he said, pointing to the damage on his driver’s side rear door. “But I finished,” He stated that his car was still functioning. “Today is a new day,” he added, a cheerful and upbeat grin on his face.