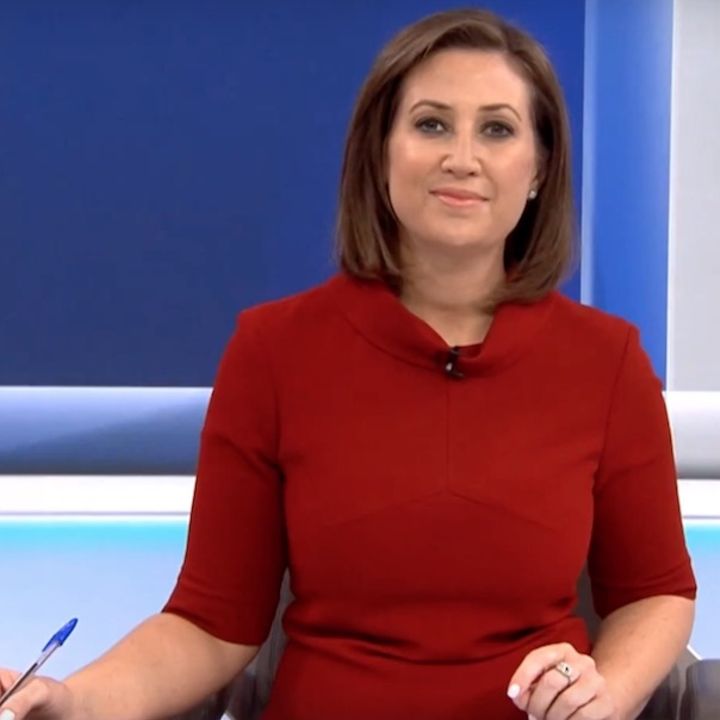 Kimberley Leonard first captured the attention of Kenyans on Twitter (KOT) after she uploaded a photo of a Kikuyu-labelled wall clock belonging to her mother.

She captioned her post, “I love the fact that my Mum is so happy with her #Kikuyu clock!”

Some Kenyan publications went ahead to refer to her as a “Kenyan-born journalist”, something she rejected: “Guys – I’m not only Kenyan BORN – I’m Kenyan….you can’t get rid of me like that! lol!”

#KOT
I love the fact that my Mum is so happy with her #Kikuyu clock!
She got it on FB in Nbo. pic.twitter.com/juBr8OKaGy

Kimberley, a news anchor with the vaunted Sky News in London, was born and bred in Nairobi’s Lang’ata estate.

The firstborn in a family of four children spent most of her childhood at Wilson Airport and Aero Club.

Her father, David Leonard, was a pilot based at the airport and her mother Christine Leonard ran a travel agency there.

“I love aeroplanes, and because I spent so much time at Wilson, a clear blue sky and the sound of a light aircraft always reminds me of home. I also love horse riding,” Kimberley says.

Her mother lives in Nairobi and Watamu, but her father died a few years ago.

“I have two sisters. Davina is the breakfast DJ on Capital FM, and Kathleen works in the tourism industry. My brother is an officer in the Welsh Guards – and you may know him as the mzungu talking Swahili at the rugby in a video that went viral a few years ago,” she adds.

She started her educational journey at Banda School and later joined Hillcrest secondary. She went to the University of Cape Town for her undergraduate studies and completed her master’s degree at the University of Westminster in the UK.

“I studied film and media at university, and I wasn’t sure what I wanted to do,” says Kimberley.

In her final year at university, she got an internship with Capital FM in Nairobi. After earning her degree, she was offered a job as a reporter.

“It was a great experience, and some of the people I worked with there are still my good friends. I love that my sister Davina is now working with the same people – her boss Danny was with me when I worked there, and with Fidel Maithya, we would go into the studios and listen to Madonna (ok, I forced them to play Madonna),” she recalled.

During her time in Dubai, Kimberley worked as a reporter and anchor on the business desk, cultivating an interest in the hotel sector.

“The UAE has a special place in my heart, and I enjoyed the nearly eight years I spent there,” she offered.

She briefly moved to Doha, Qatar, and worked for Al Jazeera before landing her current job as an anchor on Sky News, where she has been for nearly six years.

“I love working at Sky News. I work with some of the best people in the world in our field, and they are amazing. I’ve also made great friends here – who have been wonderful as I live on my own, and they were the only people I saw during the pandemic,” says Kimberley.

Just before the world went into lockdown, Kimberley visited her motherland to see her mother, who was diagnosed with breast cancer in 2019.

“I was lucky enough to come out to Kenya in December 2019 – I arrived the day that my area in the UK went into a tier which would mean that I couldn’t have left. I was so lucky to get home because my Mum was diagnosed with breast cancer at the beginning of 2019 and had chemotherapy throughout the year,” she says.

Kimberley knows too well that east or west, home is the best.

“I am so fortunate that I was able to see her as, with the new border restrictions, I wouldn’t be able to travel home now. We spent some time at home in Lang’ata, then in Watamu and along the Galana River in Tsavo – there is no other place like Kenya!” she gushes

Kimberley says she spends her free time with family or riding horses.

“There are also so many interesting things to do in the UK, and so many beautiful places to visit, so I like to do that as much as possible. I miss Kenya a lot – I miss my home, family, the people and the food!” she adds.

She also loves pets, and a few years ago, her cat Excuse Me The Cat, AKA “Squeeze”, died.

But now she has Maggie, the dog that belongs to her brother.

Kimberley is single and her celebrity crush is Chris Pratt.

“But I think he just got married, so no luck there!” she jokingly adds.

Kimberley is grateful to have had great role models in her life and her career.

“My dad taught me to work hard and always be my best. He was a paratrooper before he was a pilot, and he would always tell me, ‘keep low and always be ready to run’,” she says.

Kimberley says her mother is the true definition of a superhero.

When Kimberley landed her first job, she would wake up at 4am and drive from Lang’ata to town for her morning shift.

“She always watches me, even now – even if it is for hours on end and in the middle of the night. She also is my main adviser when it comes to my onscreen image!” adds Kimberley.

“John Sibi Okumu was my teacher at Hillcrest and is now my mentor and friend. Sally Kosgei has been like a second mother to me and has taught me that I can do it no matter what I want to achieve,” she says.

“In my career, my colleague Stephen Dixon has been my mentor and friend at Sky, showing me that kindness is always the best way – and of course, always reminding me never to take myself too seriously! And recently, Gina Din has been a guiding light for me in both my career and broader life.”

She now joins other Kenyans in flying the country’s flag high globally.

“I’ve never met Larry (Madowo), but he is doing amazing things, and it is always good to see the Kenyan flag flying high on the international stage,” she adds.

Her wish is to meet the world record marathon holder Eliud Kipchoge.

“Can someone who knows Eliud Kipchoge please tell him that I want to meet him! I don’t know how many more Insta-stories and posts I can tag him in! Lol,” she says.

Asked what she thought about KOT, Kimberley said she loves Kenyan humour.

“KOT are absolutely the best – and I know they have a sharp tongue! But even so, there is no humour like Kenyan humour, and KOT epitomizes that. I couldn’t believe it when my Twitter exploded with KOT following me and retweeting me – and it all began because I quickly did a tweet about how much my Mum loved her Kikuyu clock! Genuinely – she had been telling me about it for so many days that I just decided to tweet a pic of it. And suddenly, I had thousands and thousands of KOT following me and retweeting and commenting. Also – hi maneno ya Naivasha! I laughed so much,” she says.

To keep up with what is happening back home, she follows news on Kenyan media.

She also noted that journalists in Kenya are some of the bravest people she knows. “I applaud them all.”

Lusaka: Yes, I had an affair and I’ll support the child