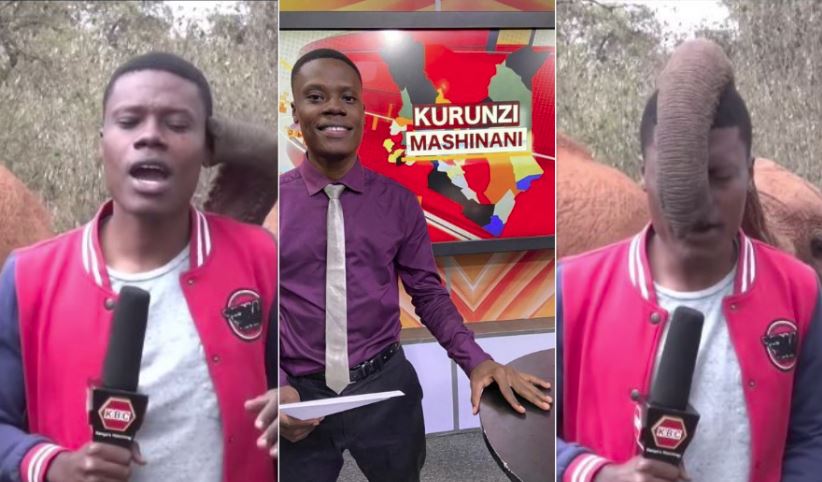 In order to report on the severe drought that has been impacting wildlife populations, Alvin Kaunda, a Kenyan journalist with the Kenya Broadcasting Corporation, checked into the Sheldrick Wildlife Trust, an elephant orphanage situated in the Nairobi National Park.

As he urged people to protect wild creatures rather than decimate their ecosystems and ruin their homes, Mr. Kaunda described how the charity had been rescuing and caring for orphaned elephants.

The younger elephants surrounded him while he was doing his outro, with one pushing on him and another tickling him with its trunk before covering the reporter’s face completely. 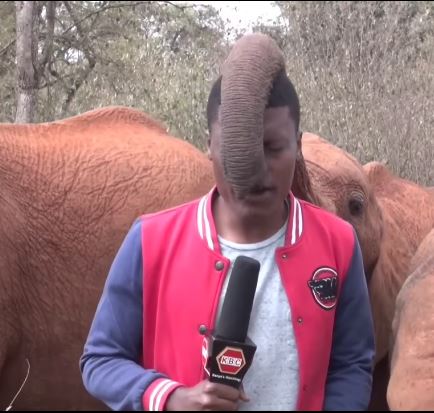 Mr. Kaunda had been attempting to maintain his composure the entire time to finish his news outro, but he started laughing when the elephants got too cheeky for him to continue.

The Sheldrick Wildlife Trust applauded him for being a professional “in the face of an elephant’s trunk!” after the humorous incident was captured on tape and went viral in Kenya.

As the hours went by, Kaunda’s viral video was also picked up by international media houses, including ITV News and Sky News, which have been airing it on Television at different times.

“This just made the ITV lunchtime news in England! Made me laugh all over again! They did not mention the trust which bugged me though!” Janet Heasman.

“It’s been on Sky news all day too,” added Maureen Seddon.

“This made its way onto The Project last night on TV3 in New Zealand, wonderful viewing,” said Jen Mack.

Kaunda’s interaction with the elephants went viral as British citizens loved his reaction to the interaction.

“He-he, Kindani’s just like one of those onlookers who can’t resist video bombing a live news broadcast by standing behind the correspondent and acting outrageous. I think I even heard her yell “Hi Dad!” to Edwin! 😉 😁 🤣 Kudos to the reporter for keeping it together for as long as he could,” Said Jacqueline Morrell.

‘I hate how I look all the time,’ Michelle Obama admits