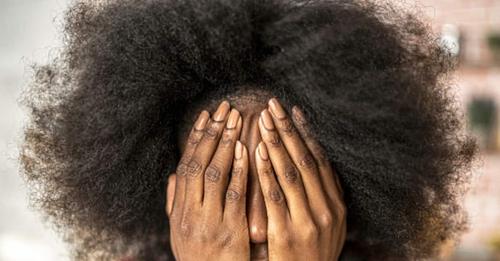 Cases of once financially stable women now struggling to make ends meet are rampant, and that of Renee (not her real name) is a great example.

The 31-year-old Instagram slayqueen who left her peers envying her flashy lifestyle is now a shell of her former self. The popular lady has been lying low like an envelope and Instagram users have been wondering where she disappeared to.

Well, Renee shared her sad story with TUKO.co.ke hoping to enlighten women out there. The beautiful, curvy lady revealed she has sunk into debts after a Nigerian man she met at a popular club in Nairobi’s Kilimani area enticed her into borrowing loans for him.

“We met in early 2019 and on the first night I went to his three-bedroomed apartment in Kileleshwa,where he was staying with five other Nigerians. It was love at first sight. We exchanged ideas and I was convinced he was the one God had kept for me,” she said.

Renee, a college graduate, who runs several online beauty businesses and mostly depends on wababa (older men) to fund her lifestyle, said she stopped dating multiple partners after meeting Alex (not his real name), who promised him heaven if she agreed to date him.

The two started dating and they would spend nights at each other’s apartments and within three months, Alex was already planning to fly her to Cyprus to study a masters course at one university in Nicosia.

Nigerian man on a borrowing spree

Renee said around the fifth month into their relationship, her prince charming was no longer treating her like a princess like before. He was no longer popping bottles whenever they went out, and he started borrowing her money.

“I was shocked when he asked me to loan him KSh 130k. I was sceptical whether to lend him or not. I had heard stories of foreign men conning Kenyan women but I never thought of him as a scammer. He was sweet and charming,” she explained.

The Instagram model said Alex borrowed money again, not twice, thrice, but several times, and she was starting to doubt if he was indeed the son of a chief back in his country as he claimed.

By September 2019, she had given the man with a sweet tongue KSh 2 million, and her savings were almost depleted.

“One morning, he called me asking for KSh1.5 million, to send to a man he kept referring to chairman so that he could help him gain his foreign back account which had been locked due to lack of proper ‘registration’. I had only KSh 170k in my savings account and he begged me to borrow anywhere and he would refund double the amount,” Renee narrated.

The soft-spoken lady said she had trusted Alex, and it never crossed her mind that he could be a scammer.

“I went to one of the money lenders offices and gave got a loan of KSh 450k and left my logbook as collateral. After that, I borrowed more money from my friends and within three days I had the cash (KSh 1.5 million),” she recalled.

Renee said Alex asked her to meet him at an apartment in Kilimani, next to the club where they first met, so that he could pick the cash there.

“We had lunch, had a lengthy chat and he promised me that he would refund all the KSh 3.5 million plus a huge interest. We parted ways and he promised to call the following day (which was a Thursday). I was happy and even called two of my best friends to share the good news but one simply responded telling me ‘hope you’ve not been conned’,” she remembered.

Renee said she started calling real estate agents, looking for a house worth KSh 6 million, as she had always wanted to invest in real estate.

Thursday came, and Renee tried calling Alex, but his phones were switched off.

“At first I thought he was sleeping and had switched off his phones as he always did when tired. I tried to send him texts on WhatsApp in the evening and they weren’t going through. I was worried and at 10 pm I drove from my place to his,” Renee recalled.

Upon arriving at the house, she said she found Alex’s roommates and went straight to his room, but he was nowhere to be seen. In addition, his favourite Gucci sneakers and Louis Vuitton scarf were missing from his wardrobe.

“I asked his friends where he was and they told me he had moved out the previous night and they didn’t know where he had gone to. I couldn’t believe my eyes. I stood there with my mouth and eyes wide open. Alex has conned me! I screamed. One of the guys comforted me before escorting me to my car downstairs,” she narrated.

Renee said since October 2019, she has never had from Alex and disclosed debt collectors took her car because she couldn’t afford to repay the loan.

“I also lost friends after failing to pay them back their money and some still threaten to get me arrested and take everything in my house to recover their money. So I no longer go clubbing and moved to the city’s outskirts. I rarely tell people where I leave because I’m afraid they’ll laugh at me or others even direct those I owe to my place,” she said.

Renee said she learnt the lesson the hard way advising women not to fall in love blindly especially with foreigners.

READ ALSO  Family and friends of victim of deadly I-75 wreck in Atlanta -Boniface Ndiangui - remember their hero
Related Topics:News
Up Next

Biden to host Kenyatta on Thursday