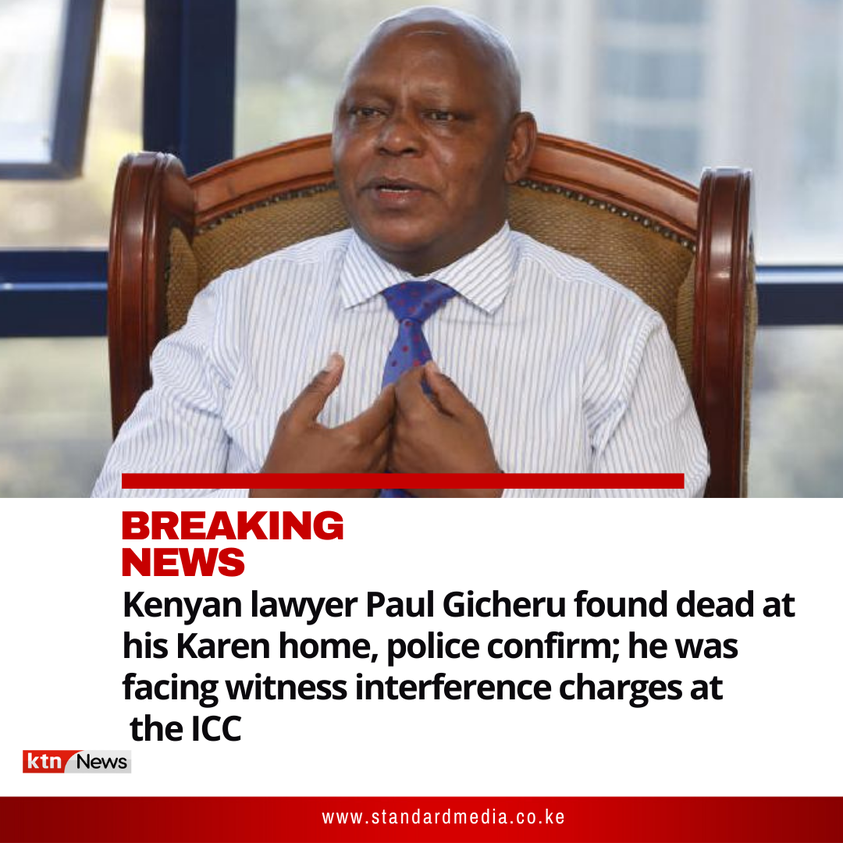 Police and family say he is believed to have collapsed and died but no further details were provided.

According to OB report number 54 filed at Karen Police Station, Gicheru had foam his mouth.

Gicheru, 52, was facing interference charges at the International Criminal Court (ICC) in The Hague, Netherlands.

After one year and eight months from the date he travelled to the Hague, in July 2022 Gicheru closed his defence before Trial Chamber II Judge Maria Samba, asserting his innocence.

Gicheru surrendered to Hague authorities in November 2020 after evading an arrest warrant issued in March 2015 for years.

Then Mr Gicheru embarked on what the ICC calls the “witness corruption scheme”, and soon witnesses started withdrawing in quick succession. Some recanted their statements. Others disappeared.

The witnesses Gicheru is said to have improperly engaged witnesses in the case against Deputy President William Ruto, journalist Joshua Arap Sang terminated in April 2016, and Henry Kosgey in whose respect the court declined to confirm charges in January 2012.

The case was terminated about a year after a similar suit against President Uhuru Kenyatta was discontinued in March 2015.

Other Kenyans who faced charges of crimes against humanity at the ICC alongside Kenyatta, Ruto, Sang and Kosgei were Francis Muthaura and police chief Mohammed Ali.

READ ALSO  I will be on the ballot in August – Sakaja

The prosecution, during its opening remarks, explained how Gicheru tried to bribe and intimidate prosecution witnesses, so as to withdraw their assistance from the court.

The prosecution said they will be presenting evidence of phone records and transactions to confirm that Gicheru acted to prevent witnesses from testifying and coerced them to recant their statements.

Recently, ICC and its Pre-Trial Chamber laid bare the case facing Mr Gicheru. While court documents adversely mention Deputy President William Ruto as one of the people in the scheme of things, the ICC has not demanded Mr Ruto’s appearance.

In 2015, the Prosecutor, frustrated with the Kenyan case, named Mr Gicheru as one of the men behind the witness interference plot. Gicheru fought back attempts to have him extradited to The Hague, with High Court judge Luka Kimaru quashing the warrant of arrest issued by Justice Ekaterina Trendafilova on both the lawyer and Mr Philip Kipkoech Bett.

But in November 2020 Mr Gicheru, 51, surprised many when he turned himself in to Dutch authorities to face accusations at the ICC which carry a prison sentence of up to five years. He is facing 16 counts.

In July 2021 — the ICC Pre-Trial Chamber, while confirming the charges against Mr Gicheru, said it “is convinced that between April 2013 and January 2014, Mr Gicheru offered various witnesses (millions of shillings) in cash instalments in exchange for withdrawing as Prosecution witnesses in the Ruto and Sang case”. The decision on the confirmation of the charges only serves to determine whether the Prosecutor’s case should proceed to trial.

The Pre-Trial Chamber also found that besides Mr Gicheru, there was Mr Silas Simatwo, from Amaco Insurance, a Mr Maiyo, Mr Bett, a Mr Yebei and Mr Walter Barasa, who acted together to undermine the prosecution’s case against Ruto and Sang.

Ruto and his co-accused Sang were both charged with instigating ethnic violence after the disputed 2007 election in which more than 1,000 people died and hundreds of thousands were displaced.

However, the ICC judges ruled in 2016 that the two had no case to answer, although they left the door open to possible fresh charges in future, noting that the case had been hampered by political interference and threats against witnesses.

A warrant of arrest by ICC was subsequently issued against Gicheru in 2015 for offences against the administration of justice consisting in corruptly influencing witnesses regarding cases from the situation in Kenya.

In what astounded both his lawyers and government officials, Gicheru who had been a wanted man for years, surrendered to the ICC in 2020.

Gicheru’s lawyers and government officials said they were not aware of his surrender to ICC given a High Court order that suspended the warrant or arrest against him was still in force.

Gicheru, who was also the chairman of the Export Processing Zone Authority, said he deliberately chose to make his travel to the Hague a secret so as not to trouble anyone.

The lawyer vehemently denied rumours and accusations that he flew to the Netherlands to try and fix Ruto by reviving the ICC case against the country’s second-in-command.

He said surrendering to the ICC was a personal decision to honour the arrest warrant.

Gicheru remained at the ICC detention centre in The Hague for three months, a stay which he termed as “comfortable” revealing that he was given good treatment by both the Netherlands Government and the court and had access to what he wanted.

“I was given my own room at the detention centre. The rooms are good, with a television and a personal computer connected to the internet. I could also eat whatever I wanted but could buy food at times if what I wanted was not on the menu,” Gicheru said.

Gicheru said detainees were also allowed limited access to phones, and that their families were allowed to visit them anytime they wished without restrictions.

In an exclusive interview with The Standard soon after returning home last year, Gicheru cut out as a confident and jovial person who was on the path to vindicating himself.

He said that by giving himself in, he had lifted a huge burden off his shoulders and was now a happy man.

“Owing to the nature of the matter, it was entirely a voluntary and personal decision in strict and exclusive consultation with my family without the participation of any third party. Any speculation on any third party involvement was entirely wrong and should be ignored,” Gicheru said.

Gicheru said he heard about the “fixing rumours” while in confinement at The Hague, which he said were all lies as he did not surrender to implicate the DP.

“I did not go to ICC to fix anyone. It was a personal decision. My conscience could not be at peace forever knowing there was a warrant from ICC hanging over my head. I wanted to clear this thing to enable me to be at peace,” he said.