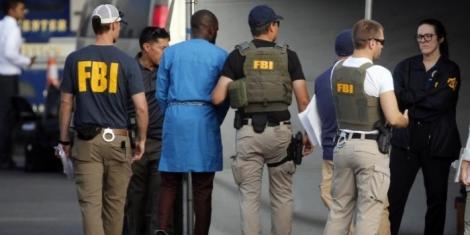 Kenyan man faces ten counts of wire fraud and one count of conspiracy for allegedly attempting to defraud a county government in the United States.

The 41-year-old is being held in detention for supposedly deceiving and defrauding the Bernalillo County government in New Mexico, United States, of Ksh51 million.

He was apprehended and convicted with ten charges of wire fraud and one count of conspiracy in federal court.

According to the indictment and other court filings, the Kenyan – who was in New York on an immigrant visa at the time – allegedly participated in a plot to falsify and defraud the government of Bernalillo County, New Mexico, from October to December 2019.

According to court records, Bernalillo County got an email purporting to be from CDW Government Inc., a real vendor that had supplied the county with items and services for which payment was due.

A picture of a voided check with the same wiring and account numbers as the ACH form was also included in the email. The email included a phone number that was ostensibly for CDW but actually belonged to the accused.

The county sent payments to the suspect’s account totaling Ksh51, 492,619 between October and December 2019. He purportedly shared a percentage of the money with his accomplices.

“As our technologies and banking systems evolve, so do the strategies of thieves and fraudsters,” said Fred J. Federici, United States Attorney for the District of New Mexico.

“For this reason, we continue to encourage heightened vigilance with respect to unsolicited email requests. The responsibility for these crimes rests entirely with the perpetrators. However, we can each do our part by taking every precaution, such as scrutinizing email addresses and verifying contact information. We will do our part by prosecuting those who attempt to deceive our citizens and institutions.”

“When governments are victimized by fraud, especially one as large as what Bernalillo County experienced, taxpayers and residents are the ones who can get cheated,” Raul Bujanda, Special Agent in Charge of the FBI Albuquerque Field Office, stated.

“The FBI will use all its resources to go after those who would steal funds that could provide critical services like public safety and health care. We also want to reiterate the importance of government agencies and businesses learning as much as they can about internet fraud and how to protect themselves.”

An indictment is merely a charge. Until and unless a defendant is proven guilty, he or she is presumed innocent. The Kenyan native faces up to 20 years in jail for each count if convicted.