After working as a pediatric nurse for 43 years, Bancy Gatimu, a Kenyan nurse living in the US, was accorded an emotional retirement celebration at the Doernbecher Children’s Hospital.

Gatimu gained the respect of the medical personnel and the patients she cared for since they were young.

She recalled how some of the young patients at the hospital, where she had worked for the longest, inside Oregon Health & Science University, call her “mom.”

“I said goodbye to the nurses and doctors,” Gatimu stated as reported by Oregon Live. “There are young doctors I worked with long ago when they were medical students and then residents.”

Gatimu’s narrative began in Kenya when she was just six years old. She sadly developed malaria and needed to be flown to Portland, Oregon, for treatment.

The nurses had a profound impact on her life at such a young age. She was motivated to study nursing in Kenya because of the care she received while she was away from home.

“I take care of children whose parents I once took care of. They see me and call me grandma from the hospital. When you love your job, it is not a job,” she said.

“I have been caring for this man who is nearly 20 since he was little. Back then he would run up to call me ‘mom’. He still calls me that when he sees me. This puzzles many since I am black and he is white,” she added. 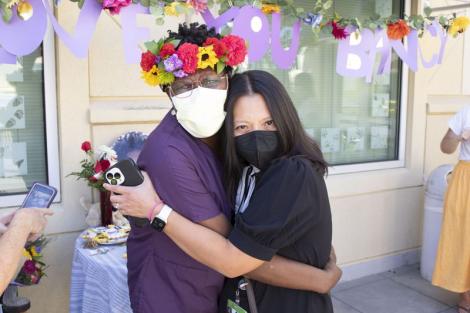 She was praised by the employees at Doernbecher Children’s Hospital as being inspirational and a joy to work with.

“When she walks into the room, she lights it up. Our floor is going to be a little bit dimmer. She is one of those people you remember in life,” said Dizon-Rosales one of the nurses Gatimu mentored 15 years ago.