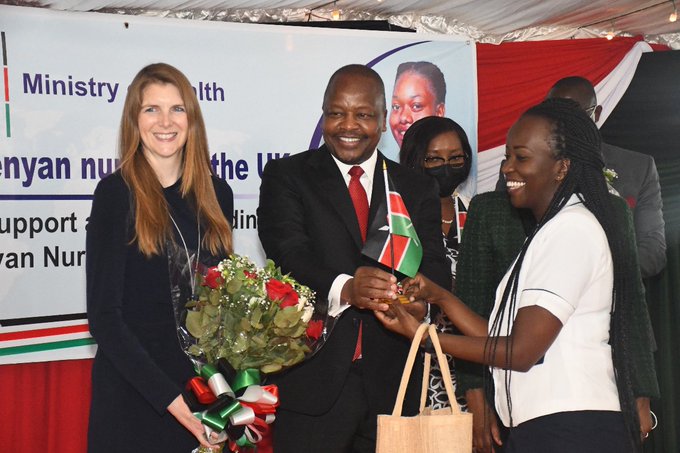 On Tuesday, the first group of Kenyan nurses who have been hired to work in the UK will depart the country.

The group of 19 nurses recruited by the UK National Health Service (NHS) as part of a bilateral labor agreement between Kenya and the UK was flagged off on Monday by Mutahi Kagwe, the cabinet secretary for health.

During President Kenyatta’s trip to London in July of last year, the MoU on the Kenya-UK Health Workforce Collaboration, which offers a framework for the interchange of healthcare workers between the two nations, was signed.

The 19 were chosen from a list of 3,329 nurses who applied last year, according to Kagwe.

The remaining six, whose duty stations have not yet been established, will depart for the UK in two weeks while the first 13 will depart the country on Tuesday and be assigned to the Oxford University Hospital.

“Kenyan health workers should be broad minded. The fact that you trained in Kenya should not limit you to Kenya. Think broadly and explore opportunities outside the country. You are not rehearsing a life. In this one shot that you have, broaden your thinking and work in other places,” said Kagwe as quoted by Nation.

“The fact that Kenya’s ambition is to become a health tourism destination, we are investing in that sector. This can only happen if the recipients of the opportunities are young people who will share their expertise from abroad and mentor those remaining in the country.”

In addition to creating a task group to supervise the hiring of future cohorts of nurses for the UK, the government is currently in the process of choosing a health attaché who will be based at the Kenyan embassy in London.

“We would have loved to see a higher number of nurses being part of this flag off, but it made sense to start small, and with one employer (Oxford University Hospital Trust) to ensure right systems and guidelines are in place before scaling it up to more employers,” British High Commissioner to Kenya Jane Marriot said during the flag off of the nurses.

“For the UK, this is not just about filling gaps in the National Health Service (NHS) or providing employment opportunities for qualified unemployed Kenyan healthcare workers. It is about increasing the numbers and quality of healthcare workers in Kenya which will, in turn, facilitate the realization of UHC.”

In an effort to ensure that the over 11,000 healthcare professionals who graduate each year find employment, Kagwe also disclosed that the government is in discussions with other nations, like Kuwait and Italy, to recruit Kenya nurses.

Wajackoyah the only Presidential candidate not bribing voters – Report