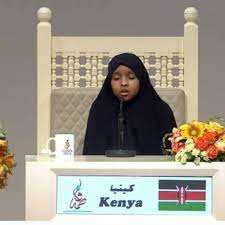 A student from Eastleigh, Nairobi named Munira Abdifatah Abdi won Ksh2 million after placing in the top ten of the 2022 Quran recitation competition conducted in Dubai.

The 15-year-old made an incredible achievement by placing eighth out of 300 contestants from around the world.

Thousands of youngsters from several nations took part in the contest to judge how well they could recite passages from the Quran.

She expressed gratitude for the victory and widespread exposure while speaking to the media following her historic victory.

“I am grateful that I finished among the top ten competitors in Quran recitation in Dubai from a pool of 300 competitors across the world,” she stated.

She added that the opportunity to meet with her counterparts and discuss various viewpoints made the seven-day trip worthwhile.

“I would like to be a diplomat after school just to be out there representing my country and learning more from other people on how to improve lives back at home,” she said.

In the preceding two years, Abdi won prizes in competitions held locally and in East Africa. Yunus Masoud, 15, won the annual Quran tournament, which pitted children from across the continent, in May 2021.