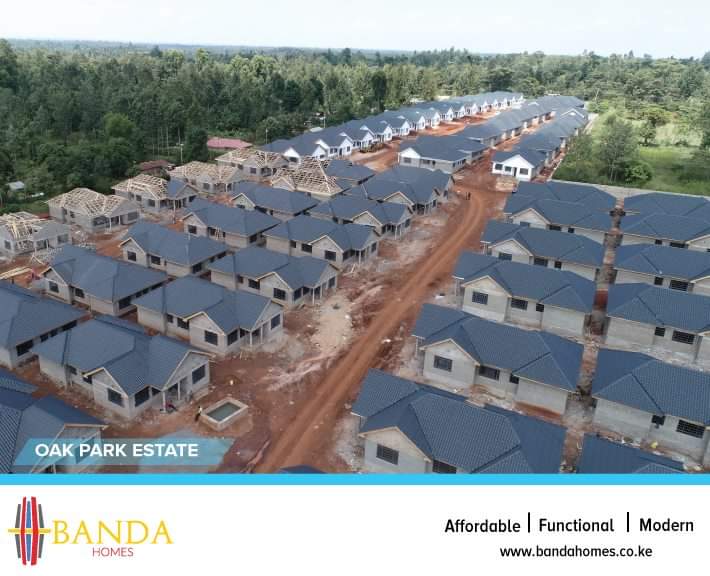 750 Kenyans, including some who live in the US and other parts of the world, are up in arms after a housing project along Kenyatta Road, off Thika Superhighway, stalled for months.

Media reports indicate that they have invested  a sum of Ksh4.5 billion for the construction of their homes, and they now want the national government to step in and end their pains.

The homebuyers have started collecting signatures to petition the Kiambu County Government and the National Assembly to investigate what delayed the project by Banda Homes, a Nairobi-based real estate company.

A report by Citizen TV on Saturday, February 13, indicated that the investors staged protests and collected signatures to petition Kiambu County Government and the National Assembly to investigate what stalled the Banda Homes project.

The protests come barely weeks to its set date of completion.

The 750 three-bedroom maisonettes remained incomplete after the project contractors were asked to vacate the site at the tail end of 2020.

Oak Park Estate. It is one of the housing projects developed by Banda Homes.
File

“We have a right as Kenyans to know because no one is telling us the problem,” stated Stephen Kori, one of the investors in the troubled project.

Another investor, Faith Ngari, noted that she had used her savings to secure the house she considers her retirement home, but her future now looks bleak.

“I am an old person and I wanted a house to live in for the rest of my life. I finished paying for the house and I need it,” she narrated.

The protesters believed that the stalling of the project was influenced by powerful individuals who they claimed colluded with the Kiambu County Government.

In  May 2020, customers of the Pinewood project claimed that Banda Homes Limited had failed to deliver houses two years after starting the housing projects.

The investors claimed that they had signed contracts with the company for the construction of residential units in Pinewood and Rosewood estates but two years later, the projects were yet to be completed.

The company rolled out an off-plan project in 2018 aimed at constructing more than 1,000 homes in various estates in Nairobi at highly affordable prices.

In a previous interview, the company’s director Andrew Kamau stated that the lack of progress was caused by lack of or delayed payments on the part of the investors.

“We are an off-plan developer and it’s important to note that off-plan developments rely 100% on customer payments. Some times we are pulled back by customers who are unable to meet their obligations in due time, they derail the project.

“Notwithstanding, we have also had various challenges. I can give you an example of last year, we had the heaviest of rain experienced over the last 10 years and I know we lost 2 to 3 months. Construction is capital intensive and I think it’s good for people to note that once you pay a deposit, the first amount caters to the cost of land. All the other installments paid out over 12, 18 or 24 months, go into construction,” he explained at the time.

Some of the homes under construction at Oak Park Estate along Kenyatta road off Thika super Highway at Kimunyu in Gatundu South that is being undertaken by Banda Homes.
Related Topics:Banda homesKenyan investors
Up Next

I gave my boss an ultimatum and became jobless