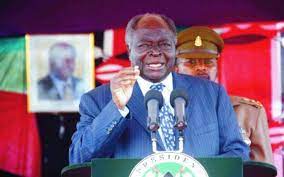 Kenyans have expressed their heartfelt griefs on social media condoling with the family of the 3rd President Mwai Kibaki who died on Friday morning. The death was confirmed by his personal doctor, interventional and non-invasive adult cardiologist Dan Gikonyo.

They said Kibaki uplifted lives of Kenya through a favorable economy and uncountable developments ranging from educational, environmental and  infrastructural.

“I stepped to a class first time in the year 2003 when the late President Kibaki announced free primary education and I was then eighteen years old in class one. I worked hard and scored good marks that earned me a sponsor to secondary school who took me to college later. I can proudly say that what I achieved, Mzee Kibaki contributed,” read Engineer Stephen Opondo’s post on Facebook.

Programme leading up to the state funeral of Kibaki has been established through a national steering committee featuring representatives from the government and family members.

The committee has convened a meeting on Saturday to deliberate on programme of events, dates and venue where the family shall receive visitors and accord all Kenyans chance to participate in paying of last respects to Mzee Kibaki.

Kibaki’s family has acknowledged  condolences messages from all corners of the world.

READ ALSO  'I was scared when I found out I was pregnant' Kansiime opens up
Related Topics:Kenya news
Up Next