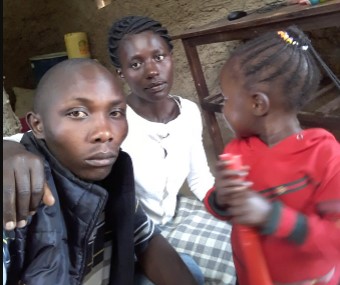 Kenyans on Twitter have sent Henry Lusutsa Malumu about Sh20, 000 for Christmas after he posted a picture of his family in their rural home, all set for Christmas festivities.

The 28-year-old man posted a picture of himself, his wife, and their two-year-old daughter in their newly built house in Shinyalu, Kakamega two days after moving in.

The selfie captures Henry, his wife, and their daughter in a small living room. In the background is a newly constructed mud-walled house with iron sheet roofing.

In an exclusive interview with The Standard on Sunday, Henry said he had no expectations when creating the post, adding the support he got from Kenyans was a surprise.

“I just posted innocently. Then shortly after, people in my comment section started asking for my contacts to send us money which some did. We got almost Sh20, 000,” he said.

According to Henry, the post was intended to share with his friends the progress he had made after spending two nights in their house.

“I felt that was a safe space to share the progress. I just constructed that house this holiday and we had just moved in,” Henry told The Standard.

He added, “We went to our rural home last week to construct the house which to me was an accomplishment,”.

The father of one says he lives in Kibera, Nairobi, and works as a security officer in one of Post Bank outlets in Nairobi.

Further, he said that they had gone to celebrate the festive season with their extended family in their rural home and travelled back to Nairobi on December 26.

READ ALSO  "I still can't sleep on my right side," MaryaPrude admits after painful child loss

VIDEO: My Kenyan husband married another woman while I was in the US for 19 years, I was later deported – Makena