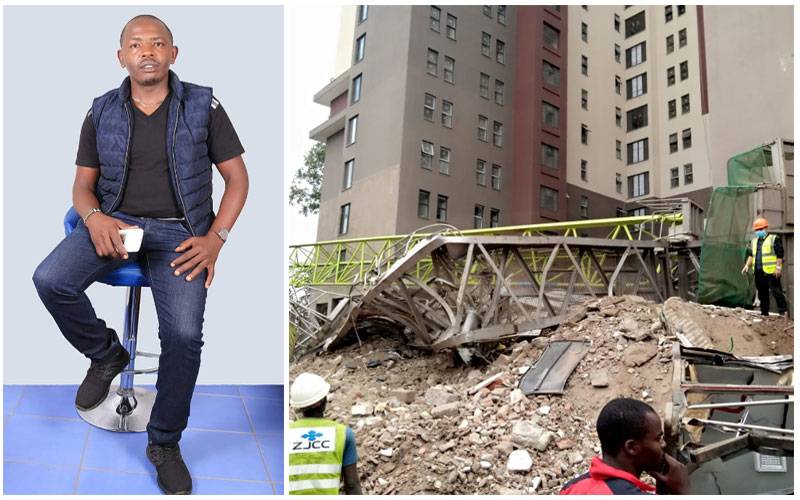 Thursday, August 26, started as any other normal workday for Danson Magu, a resident of Kasarani in Nairobi.

The father-of-one, who was a crane operator, left home for work; a construction site in Kilimani.

All was okay until afternoon, when a lifting machine operated by Magu crumbled and frittered into composite parts.

Magu, 35, was among nine victims who died at the scene. The construction site, where the accident occurred, is located opposite Silver Springs Hotel.

The impact of the machine’s collapse was so devastating that it killed the nine on the spot.

At home in Kasarani, Magu’s wife, Rhoda Magu, was hoping he’d return in the evening – as he usually did – to play with their 5-year-old son, a daily ritual that he never failed to honour.

“Dan (Magu) and I got married six years ago,” Rhoda told The Standard.

“In my entire life, I have never seen a person who is well-meaning, loving and caring more than my husband.”

Rhoda and Magu had known each other for 13 years, but to the mother-of-one, that was “akin to a lifetime”.

“Our son resembles him, almost to the last feature on his body,” said Rhoda.

The widow says their love life, that began sometime in 2008, saw Magu’s patience being tested to the precipice.

“I was in Form Two when I met him. He loved me, but because I was still a student at the time, he decided to wait until I completed my secondary and university education before he could formally ask me out,” said Rhoda, an alumnus of Kenyatta University, 2015 class.

READ ALSO  Raila lands in the United States for his tour

“Dan personified patience; patience was Dan, and Dan was patience. How many men in today’s generation would wait for seven years to get the go-ahead to date or marry a woman?” posed a nostalgic-yet-grieving Rhoda.

Magu’s colleagues at work said he had a “good heart”, and was such a great team-player.

At the heart of crane operations, Magu’s name never missed.

Stanley Mathenge, one of the site workers, who is also Magu’s relative, said it was “heartbreaking to lose someone who helped me get a job here”.

“I’m lucky to be alive. For the longest time, it was either Magu or myself operating the crane. Two months ago, I was transferred to another construction site,” said Mathenge, Magu’s nephew.

Eyewitnesses say they heard rattling sounds from the Kilimani construction site before the lifting machine came thudding against the ground with a thunderous bang.

As it collapsed, the construction workers, who were in the machine’s bucket, were thrown out in distressing scenes. The heavy equipment, thereafter, crashed on them.

Some of the people at the scene suggested human error might have caused the fatal accident.

“The machine was being removed from the site after completion of the day’s work. It was during the dismantling at the base, that one of the operators negligently or unknowingly loosened a bolt, resulting in the crumbling,” said an eyewitness, who identified himself as Bramwel.

The informant said he has been a construction worker for at least 10 years.

Another eyewitness, Josephine Matere, who lives in the neighbourhood, told The Standard that the crane “shook for two minutes” before tumbling down with people in it.

“It was heart-wrenching to see people being thrown out of the machine, but we couldn’t do anything to help. Everything happened so fast,” said Matere.

Other victims were trapped in between metallic bars, said the eyewitness.

The Government is yet to give an official account on circumstances leading to the Kilimai accident.

Mugo’s wife, Rhoda, says: “We’re still waiting to hear from them (Government) on what led to the accident that claimed the lives of my spouse and his colleagues.”

The families of the other eight victims are also waiting on the State’s statement.

A postmortem report is expected on Saturday, August 28.

Meanwhile, Rhoda says: “It is after the autopsy that we’ll bury our loved one.”

Magu, whose body is at the Chiromo Funeral Parlour, will be laid to rest at his ancestral home in Kamune Village in Mathioya Sub-County, Murang’a County.

Here, it’s an honour for men to buy groceries for wives

I wouldn’t wish Covid even on my worst enemy, says Raila man after second attack