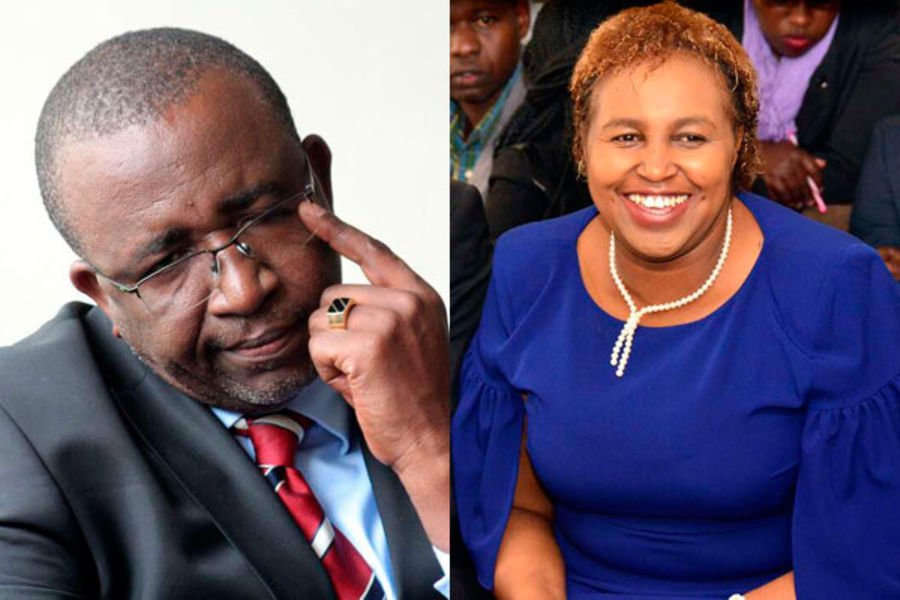 Meru Senator Mithika Linturi’s estranged wife Maryanne Kitany and the police want court to dismiss a case he filed seeking to stop his arrest for allegedly sexually assaulting another man’s wife at a hotel in Nanyuki.

This came yesterday as the court enjoined the victim of the alleged assault as an interested party to the case in which Mr Linturi accuses her of extorting Sh1 million from him over the January 29 night incident at Maiyan Villas Resort.

In their documents filed in court, Ms Kitany, the Directorate of Criminal Investigations and Director of Public Prosecutions argue that Mr Linturi’s application is based on speculation since the criminal charges are yet to be approved.

Ms Kitany says it is untenable for the court to grant Mr Linturi’s request for variation and enhancement of the earlier orders, which barred his arrest in relation to alleged fraud.

Mr Linturi, through lawyer Charles Benedict Mwongela, wants court to vary the orders dated May 11, 2021 and prohibit the authorities from intimidating, arresting and charging him with new criminal offences founded on “attempted rape and indecent act with an adult”.

But Ms Kitany says the fresh saga on sexual assault is not related to the pending commercial dispute, pitting Mr Linturi against her, their two trading companies, children, and financial lenders among others.

“Linturi is not entitled to the orders sought because the application has no merits.  His application is a mere afterthought and merely meant to embarrass, drag and delay hearing and determination of the petition (on commercial disputes). Grounds upon which his application is based are speculative hence unjust and unenforceable,” says Ms Kitany.

The DPP and the DCI in their joint response state that Mr Linturi’s application is aimed to curtail their mandate in the criminal justice system, and that it is an abuse of the court process.

“The conservatory orders issued by this court did not in any way amount to blanket orders to shield Linturi from all criminal investigations, arrest or prosecution,” says Mr Namukhasi.

“Linturi is misinterpreting the said order to mean that he cannot be investigated, arrested or charged whatsoever,” he states.

The officer says investigations into the alleged sexual assault have been underway since January and the politician was well aware as he had earlier presented himself to the police over the same to give his version of events.

Upon conclusion of investigations, the file was forwarded to the DPP who is yet to make a decision on whether to charge Mr Linturi and with what offences.

The present application is a pre-empting decision of the DPP, hence is premature, the police say.

“The complainant in the rape and indecent assault charges has no nexus or relation whatsoever to any of the interested parties or respondents in this petition. The case is totally independent of the initial 37 counts that were stayed and should be treated by court as such. The conservatory orders were specific and temporary,” says Mr Namukhasi.

READ ALSO  Mithika Linturi: I am worth Kshs.1.2 billion

He also denies Mr Linturi’s claim that the sexual assault case is political and is connected to the forthcoming by-election in Kiagu Ward Meru County.

“Politics should be left to the right forum and not in the Constitutional court and legal issues are allowed to be determined on their own merits. The DPP and DCI are merely carrying out their constitutional mandate and have no interest in Linturi’s political or commercial interests whatsoever,” says the officer.

Justice Weldon Korir yesterday directed the parties to exchange their documents as he fixed the hearing of Mr Linturi’s application on October 12.

Mr Linturi says that the looming arrest in relation to the alleged sexual assault is aimed to assist his former wife and others facing him in the alleged fraud case in resolving the ongoing civil, commercial and family disputes in their favour.

“DCI aims to coerce me to adopt a particular stand on contemporary political issues, and especially as regards ongoing political formations ahead to the 2022 general elections. He aims to silence me from voicing issues deemed unpalatable to the present political regime,” says Mr Linturi.