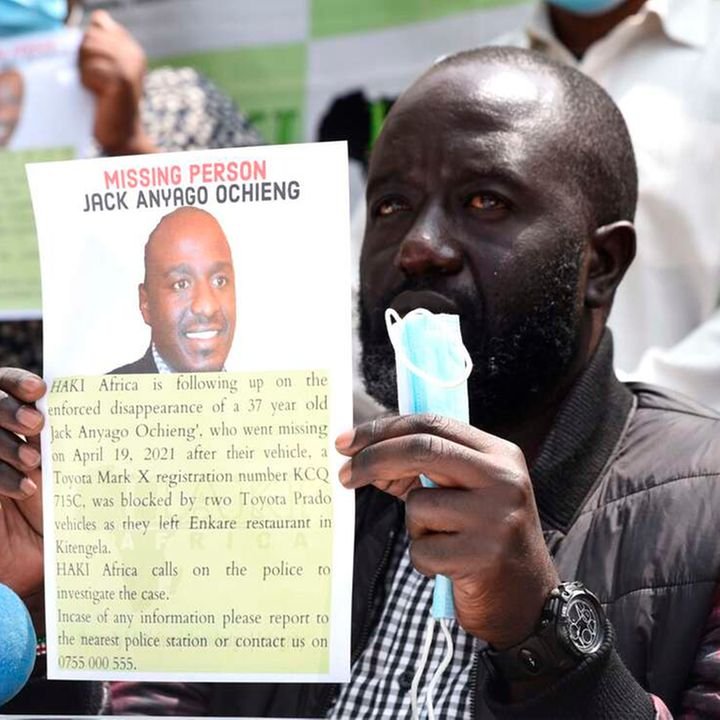 The mysterious disappearance of Jack Anyango in Kitengela last month is taking a heavy toll on his family, with both his mother and wife now hospitalised.

Olga Ochieng and Monicah Mugo were last week admitted within 48 hours of each other for severe depression and a miscarriage, respectively.

Ms Ochieng, 64, was taken ill on Wednesday and rushed to Homa Bay County Hospital for stress-related health problems while Ms Mugo was admitted to Kenyatta National Hospital (KNH) on Friday with pregnancy complications.

The uncertainty of the case has left the two most important women in Anyango’s life on the brink as they struggle to come to terms with the situation, almost a month after they last saw their loved one. Anyango, 37, was among the four men who were kidnapped after lunch at a popular club in Kitengela, before the bodies of Benjamin Imbai, 30, and Elijah Obuong, 35, were recovered in a river in Murang’a.

Anyango and Brian Oduor’s families, however, are still in the dark as to their whereabouts after the April 19 meeting. Ms Ochieng is a retired marine worker and lives with her husband, Philip Ochieng Anyango, 65, in Rodi village, Homa Bay County.

“Life has been tough for me and our two-year-old son. I was six months pregnant. I have not been able to live in our rental house out of fear. I have been putting up with my sister,” she told Nation.

The family maintained that Anyango was a “clean man” who worked for several tour companies until 2019. He had, however, closed his business after a car he had acquired was repossessed by a financial institution.

Mr Ochieng said his brother was struggling to make ends meet and disputed reports that he was a wealthy young man who lived large.

Mobile messages seen by Nation paint a picture of a desperate man who was constantly asking for financial help from relatives. Just before he vanished, he had sent his wife Sh100.

“My brother was a hustler. He took alcohol and had many friends. He was not a man of means like his peers. He had no criminal record. We raised money for him last year to offset his rent arrears for a two-bedroom house in Donholm Estate before he moved to a one-bedroom apartment in Jacaranda,” said Mr Ochieng, adding that he had been to more than 20 morgues in search of his body.

However, some of his friends had a different view of Anyango, alleging he owned a fleet of high-end vehicles and other properties now under investigation. Preliminary data analysis by the Directorate of Criminal Investigations (DCI) indicated that Anyango’s phone was switched off at Kisaju, about18 kilometres from Kitengela, on the evening of April 19.

Born in Rodi village, Anyango attended Josana Academy before proceeding to Chianda High School in Bondo between 1999 and 2002. He studied ticketing and tours at Utalii College between 2003 and 2005 had lived in Nairobi since 2008.

Mr Oduor’s wife, Catherine Anyango, last month expressed her displeasure with the information being shared on social media that alleges her husband was a criminal.

“They (the media) are saying that Brian was the leader of the gang. These stories that are being published are making us very scared,” she texted. The case has been taken over by the Homicide Department of the DCI. Attempts to reach them for comment were futile.