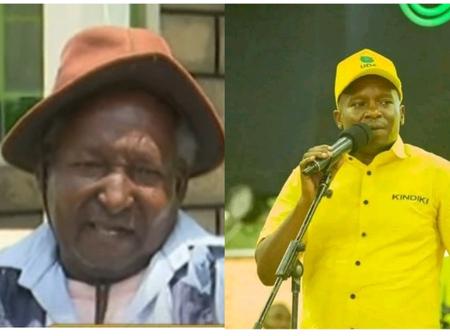 Tharaka Nithi Senator Kithure Kindiki’s father, Daniel Kindiki, has urged Deputy President William Ruto to consider his son for a position if he wins the elections on August 9.

On Sunday, May 15, Daniel told the media that his son was a good fit for the running mate position because of his expertise and leadership ability.

He encouraged the Senator to carefully consider his alternatives before proceeding. He also advised his son not to run for any elective office in Tharaka Nithi, preferring instead to pursue a national role.

“My request is for Kindiki to be given a prime slot such as Interior CS when they take office,” Daniel Kindiki stated.

Kithure’s mother, Ann Kindiki, on the other hand, expressed disappointment that her son was not chosen to deputize for Ruto.

“My hopes have been dashed. We were hoping the Deputy President would appoint my son his running-mate because he is a man of integrity, who has delivered in the various jobs assigned to him,” Ann stated.

What was supposed to be a simple process for Ruto to choose a running mate developed into a 17-hour standoff at the DP’s Karen home.

Kindiki, who was conspicuously absent from the meeting when Rigathi Gachagua was picked Kenya Kwanza’s running mate, later made a statement saying he will declare his plans on Monday, May 16.

READ ALSO  My husband came home from US and eloped with my cousin, Nairobi woman narrates
Related Topics:August 9 General ElectionsDP William RutoKithure KindikiNewsRunning mate
Up Next