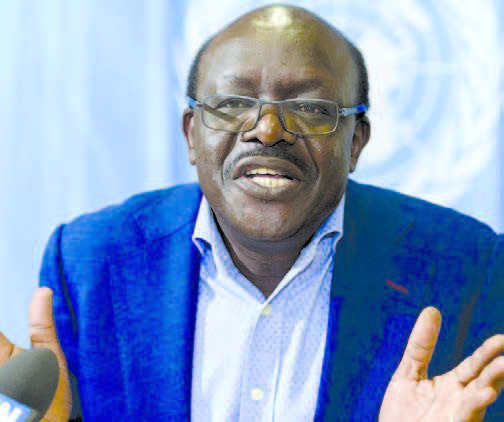 Mukhisa Kituyi has finally reacted to a reported ‘sex tape’ scandal involving him, by explaining the video was photoshopped by people who want to ‘finish’ his career.

The veteran politician who recently announced his intent to succeed President Uhuru Kenyatta in 2022, has been in the news for not-so-good reasons in the last after a video appearing to show him in a comprising position was widely shared on social media.

In his response, Kituyi, who is making a return to politics after more than a decade, stressed that ‘nothing’ was going to stop him from succeeding President Uhuru Kenyatta in 2022.

“I, therefore, dismiss the photoshopped edited video doing rounds on social media purporting to expose my private parts. It doesn’t in any way whatsoever depict the true representation of my private organs. I want to distance myself from such false and untrue malicious stories destined at killing my political career,” he said in the statement.

He’s further asked his supporters to ignore the video.

The video’s appearance comes weeks after Kituyi has been under sharp criticism from a section of Kenyans after a lady identified as Diana Lutta accused him of assaulting her at a hotel at the Coast.

These allegations attracted the attention of detectives who confirmed they were investigating the incident.

During his political hiatus, Kituyi served as Secretary-General of the United Nations Conference on Trade and Development, UNCTAD between 2013 to 2021.