Koinange: So humble, yet so powerful, rich 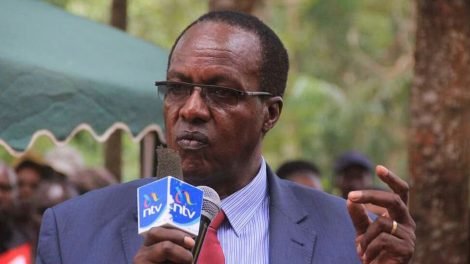 Kiambaa Member of Parliament Paul Koinange, who died yesterday at a Nairobi hospital, was a humble and calm politician but who wielded immense power and influence behind the scenes.

Despite being the scion of colonial chief Koinange wa Mbiyu’s family and a relative of President Uhuru Kenyatta, the MP easily mingled with ordinary people as well as colleagues in Parliament.

The MP was the son of Noah Karuga, the brother of Mbiyu Koinange, a former powerful Cabinet Minister in the government of founding President Jomo Kenyatta.

Jomo had married Karuga and Mbiyu’s sister, Grace Wanjiku, as his third wife. Announcing Koinange’s death yesterday, Uhuru said the second-term MP, who was the chairman of the National Assembly Security committee, was “dependable, and steadfast supporter of the country’s peace agenda”.

“Through the National Assembly Departmental Committee on Administration and National Security where he was the chairperson, Hon. Koinange advanced legislation and policy interventions that sought to create a peaceful, stable and tranquil nation,” said the President.

Koinange, who was 71, will be buried on Saturday in his Kiambaa village home in Kiambu County, the family announced yesterday.

Unlike most of his colleagues who drive high-end vehicles, the wealthy Koinange drove himself in a Nissan van or an ordinary Land Rover.

Koinange, who made his debut in politics in 2013 when he was elected Kiambaa MP, could park his vehicle on the roadside and walk to a kiosk in his constituency to buy soda and mandazi for his passengers.

He was an advisor to late Sudan VicePresident John Garang on the peace deal and served in different portfolios in the country as a consultant and businessman. Koinange also worked as a consultant for the South Sudan government in the construction of an oil pipeline and facilitated the setting up of a printing press in Juba – under Print Link International Limited.

Those who worked and interacted with the soft–spoken MP described him as “humble but extremely firm and decisive”. Though an ordinary MP, he commanded the authority similar to a Cabinet Secretary and colleagues often sought his help on matters security.

Yesterday, members of the Security Committee could not hold back their tears before cameras as they paid glowing tribute to their departed boss.

“His death has taught us to be humble. He brought people together and preached peace in all forums he had an opportunity to address,” said Gedi. Added Gedi: “On his behalf, let’s pass the BBI Bill because he always wanted a peaceful country. We will also ensure all the Bills he initiated are realised.” Koinange was a key proponent of the Building Bridges Initiative that is spearheaded by President Kenyatta and opposition chief Raila Odinga. Gedi had to cut short her address after she was overwhelmed by emotions.

Kaluma hailed Koinange for his commitment to improving the conditions under which police officers work. “Koinange is one of those MPs who believed in talking very little but delivering very much,” said Kaluma. Recently, Koinange was behind the push to criminalise the Hustler Vs Dynasty narrative being propagated by politicians allied to Deputy President William Ruto by having it classified as hate speech.

Kiambu Senator Kimani Wamatangi said the late MP demonstrated extraordinary leadership skills, saying despite the powerful positions he held in Parliament and his family background, he conducted himself with humility.

“Though he came from a prominent family and held a powerful House leadership post that put him in charge of security matters, you would never hear him brag about it,” Wamatangi told People Daily.

In 2017, Koinange, Wamatangi, Moses Kuria (Gatundu South), Kimani Ichung’wa (Kikuyu) and late Francis Waititu (Juja) were the only leaders who were re-elected in Kiambu County after nine other MPs, and Governor William Kabogo.

Excitement in K’Ogelo ahead of Obama’s visit