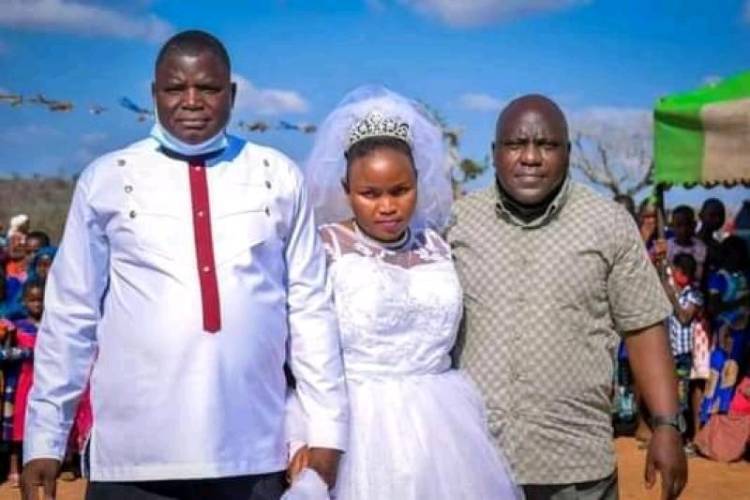 The late Lamu sub-county police commander Rev Samuel Nyawa Murinzi, 50, who succumbed to Covid-19 last week, fell ill minutes before he could cut his wedding cake. Their beautiful wedding was held on August 28. However, after they had just finished taking wedding vows and  the pastor  declared them husband and wife, Murinzi started complaining of chest pains and breathing difficulties.

After the couple’s first kiss, which apparently become the last, Murinzi struggled to walk and talk.“After he fell ill, he was rushed to a private hospital in Kinango town where he was (mis) diagnosed with malaria. He was given anti-malaria tabs and discharged,” said a family member.

At night, Murinzi’s health deteriorated and was rushed to Diani Beach Hospital which referred him to Coast General and Referral Hospital in Mombasa, but he later died. He had planned to take his wife to Lamu for her honeymoon, but the trip was never to be.

Speaking to The Nairobian, the family spokesman, James Dawa said Murinzi’s wife, Marrian Ndindi is still coming to terms with the death of her husband, whose burial is slated for September 18.“She (Marrian) is shocked but doing fine. She went to Lamu to pick their belongings,” said Dawa, who is also Puma ward MCA.

The OCPD had lost his first wife,  Magret Ruwa, to cancer in 2020 leaving him with five kids. In his village, villagers plan to conduct both traditional and religious rituals during the burial. Rev Murinzi was the clergy, a senior pastor of East African Pentecostal Church.

READ ALSO  Ruto: Give me 1 year to reduce unga prices

Murinzi served as the deputy OCPD at Mombasa’s Makupa Police Station before he was promoted and transferred to Lamu where he served for less than a month.

“He was one of the Duruma finest, humble, charismatic, accommodating, true statesmen who risk,” said Kinango MP Benjamin Tayari.

The MP said the late Murinzi will be remembered for his great contribution to helping the needy. He said the OCPD, a staunch believer, and reverend in the East African Pentecostal Church, was also eulogized as a humble and polite man who put the needs of others first.

Lamu County Commission Irungu Macharia described Murinzi as a hard-working officer who brought changes within the short time he served in Lamu.“It is a big blow for us and police service as a whole to lose such a reliable officer. I condole with the family during these trying moments,” said Lamu County Police commander Moses Mureithi.The residents of Lamu praised him as an officer that brought changes to the area and strove to help resolve long outstanding issues in the area.Lamu County Governor Fahim Twaha described him as a great and brilliant man who was genuinely interested in changing Lamu.