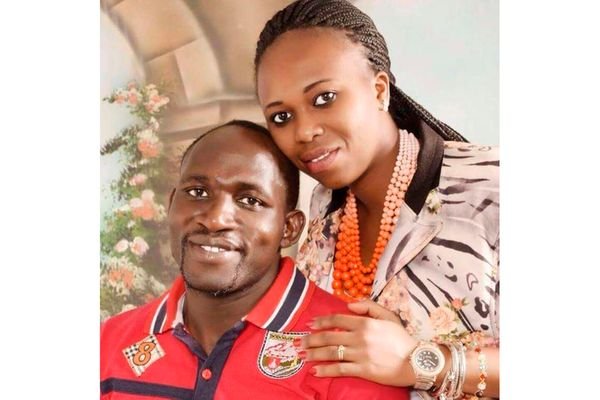 When bad luck chooses you as a companion, even a ripe banana can remove your teeth, so goes an African proverb.

For Prof Fredrick Ogolla, the academic director MBA programmes and the director Institute of Strategy and Competitiveness at Strathmore University, bad luck handpicked him on the very last day of 2017.

He suddenly lost his wife, Rebecca Gombe Mwachongo, fondly referred to as Becky. Then the police came after him, separating him from his six-week-old baby.

The couple had been married for three years without a child, and the joy of their marriage hit its peak towards the end of 2017 with the arrival of their son, Matisse.

They had planned to usher in the New Year in style at the quiet ABC Place in Westlands, but as fate would have it, that was not to be.

“December 31, 2017, the day we had planned to celebrate our baby, started well. Our Spiritual director, Fr Andrew Massawe of the Congregation of the Holy Cross, who was at that time in Uganda, had fallen ill and urgently needed additional doses of some medication, as the hospital where he was admitted to did not have enough doses. He requested me to send him the medication to Kampala by bus and so in the morning, I went to the Nairobi Hospital and picked up the medicine. Before proceeding to town to send him the parcel, I came back to the house briefly,” Prof Ogolla told Saturday Nation.

When his wife noticed that he was preparing to leave, she asked him where he was going and he told her about the parcel.

“She joked, ‘Sweetheart, you are going nowhere’. I asked her, ‘how will you stop me?’ Then she said, ‘let me show you’, as she romantically pushed me into bed,” he narrated.

In that playful moment, Prof Ogolla says his wife exclaimed ‘aha’ and fell at the edge of the bed.

“I took it that she was still playing and escaped the bedroom temptation,” he said.

After sending the letter, he said, he communicated with the house help, who told him that Becky was on the floor struggling to get up.

“I got anxious. I rushed back to the house even though, with the city traffic, it was impossible to reach home fast. On arrival, I found her on the floor and immediately called the neighbours, who came and helped me get her into the car and rushed her to hospital.

“I suspected that it was something to do with post-natal issues, as she had given birth a few weeks before, so I rushed her to the hospital where she had earlier delivered – Aga Khan Hospital. I called her mother and her sister to notify them of the matter,” he explained.

They arrived at Aga Khan Hospital shortly before 6pm. Becky was taken through emergency checks. All the vital signs were there and her oxygen level was 96 per cent.

All this time Prof Ogolla was carrying their six-week-old baby, praying and hoping that his wife would get better soon.

“Around 9pm, the nurses told me that she might not be able to breastfeed her son anytime soon and so I should start thinking of alternatives. I was worried as to who would stay with my son at home as I stayed with Becky to monitor her treatment. I once again called Becky’s mother and sister, telling them that the situation was serious and needed their help. Since they could not get the means from Voi to Nairobi that night, her sister promised that they would come to Nairobi the following day,” he said.

Prof Ogolla says after all the tests were done on his wife, he rushed home with their child and found some milk in the fridge, which he gave him and put him to sleep. Around 1.30am, as the New Year fireworks lit up the night sky, the doctor called.

“I was needed urgently at Aga Khan Hospital. In a panic, I shared the news with family and friends on a WhatsApp group, requesting them to pray for Becky. On arriving at Aga Khan, I found that Becky had had a heart failure and the doctors were resuscitating her,” he narrated.

His wife, the doctors said, had fluid in the lungs and blood clots in the heart and the brain, which had caused stroke on the left side of her body. Prof Ogolla sought approval to have her moved to the ICU before going home.

Around 4am, the doctor called once again, informing him that Becky had had her second heart failure as they were moving her to ICU.

“I rushed back to the hospital. By the time I arrived, they had succeeded in resuscitating her the second time. I called our Parish Priest, Fr George Wambua of St Austin’s to come and pray for her. He came and ministered the sacrament of the anointing of the Sick.”

Shortly after 9am, on the New Year’s Day 2018, Becky had a third heart failure and unfortunately the doctors were unable to resuscitate her.

“At 10.30am, the love of my life, Becky, left me and the entire family and friends in a pain that was too deep to bear. I felt hollow. I could not easily accept that she had gone. I didn’t even know how I would take care of our six-week-old baby,” he recalled.

Prof Ogolla also had the difficult and painful task of informing family members, friends and those who needed to know of the death, and of arranging for her body to be moved to the mortuary.

The next day, at 6.45am, Prof Ogolla found six police officers at his door. They told him that he had to record a statement at the police station.

“They said it would not take long and that I needed not even take breakfast first. I followed them to Muthangari Police Station, where I was told I could not leave without authorisation from the Directorate of Criminal Investigations. I spent the next three weeks in the police cells: from Muthangari to Kabete to Capital Hill and so on. Within the 21 days I was detained, I was moved to more than 10 police stations.

“The police commandant of Nairobi, Mr Japheth Koome, called a press conference and declared me a killer. Then the media, friends, relatives, colleagues and others took different positions. As some pronounced the death penalty on me, others who really knew me stood by me. For nearly two weeks, news headlines were about me. My family was terrified,” he said.

Prof Ogolla’s phone and that of his wife were taken for forensic investigations and postmortems were done.

All the findings held that Becky had died of a natural cause and that there was not a single physical injury on the body, rendering the domestic fight rumour baseless. By this time, the police had concluded their investigations and they, too, found no evidence linking Prof Ogolla to his wife’s death.

“Forensic investigations on our phones did not yield any link to the lies peddled through the media, friends, relatives and colleagues. One of the lies was that a woman had allegedly called me, which led to a fight that led to my wife’s death. Another lie was that I did not inform my in-laws of the death and that I was planning to bury my wife as soon as possible,” Prof Ogolla said.

Justice Luka Kimaru released the don on Sh100,000 free bond and pronounced that the prosecutor was free to arrest him in case any evidence emerged within three months. However, he said, if after three months there was no evidence then the case would be closed.

“I was allowed to go home to mourn and bury my beloved wife. I laid her to rest at my home in K’Ogola K’Ongira Farm in Kateg Jera, Ugenya, Siaya County,” he said, adding that to date, there has been no evidence linking him to her death and that he has never been charged.

“Upon realising they had falsely accused me, my in-laws apologised, we buried the hatchet and I forgave them for the pain they had caused. United we put Becky’s soul to rest,” he said, adding that since then, his relationship with his in-laws has again become cordial.

“We visit one another, share meals and exchange gifts and other things,” he revealed.

Prof Ogolla says the death of his wife, under those circumstances, posed the biggest challenge and taught him several lessons.

“I had to accept the bitter truth that I would raise my son on my own. Inasmuch as many people requested me to give them my son to raise him, I could not accept the offer as I felt and still feel this was the most precious gift Becky left me with. Therefore, I have to be there for him and with him.”

His other lesson, he says, was around people’s ability to misrepresent facts.

“Some media houses reported that I was a 60-year-old man married to a young lady. Little did they know that I got my PhD before reaching 30 and married Becky thereafter. Our relationship started when we were both students, without even a house, and whatever possessions we had were acquired during our relationship.

“There was also a claim that Becky had a baby with another man, thus creating a fight. However, the DNA test carried out by the police proved that Matisse is my son. Others alleged there was a fight occasioned by a call from a woman. Forensic evidence proved that there was so such call.”

His brothers and sisters, he said, stood with him during the entire period.

“My wife was a precious gift. She was a planner, an organiser, a focused and very loving woman. She organised my work, my travels, our family. I lost all that. Earlier, we had discussed how to raise our son. I was pleasantly surprised to discover that she had documented all this. It is her notes that I have been using to raise Matisse to be the son of whom she will be proud when we meet again in Heaven.”