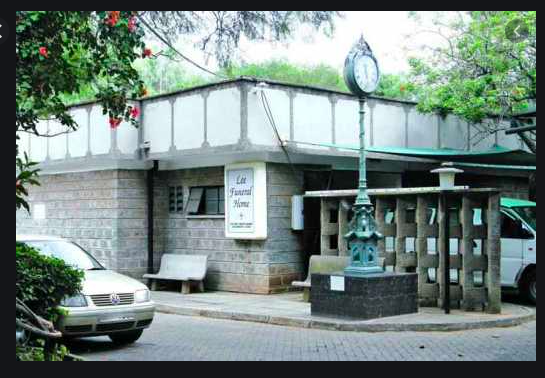 Lee Funeral Home was trending for the better part of Friday morning as speculation was rife that a VVIP’s body had been taken to the parlour. Some netizens went ahead to share pictures of security personnel at the entrance but a fact check by the Standard Entertainment team revealed that the photos had been taken a while back.

Speaking to Standardmedia.co.ke in an interview, a source at the funeral home refuted claims that a VVIP had been taken to the facility and urged Kenyans to stop spreading unverified information.

“There is no heavy police presence at the facility. Everyone has been calling to ask if a high-ranking government official has been brought here but I can confirm to you that there is none. Those spreading such falsehood should physically come and check whether there is any unusual activity,” he said.

The home was founded by John Lee in 1987 after he received several complaints about the state of City Mortuary at the time.

“I was born and educated here in Nairobi and in 1963 my parents and I went back to the UK and in 1964 I joined the main police force and after a while, they took me to Addenbrooke’s Hospital in Cambridge to work for the coroner’s office. I was dealing with pathologists and undertakers every single day…so when I came back to Kenya in 1968 and was told of the appalling state of City Mortuary, I was asked by various people to help set up a better facility,” said Lee in a recent interview.

He further revealed that at one point he got a call from Sir Charles Njonjo, who was the then chairman of Nairobi Hospital and he had a suggestion. “He (Njonjo) said, would you like to build a funeral parlour on the grounds of Nairobi Hospital? We built the current Lee Funeral home within the grounds of the hospital in 1987 and we opened it on 12 December 1988,” said Lee.

He stressed that one of the core values of the home is to give first-class quality service to bereaved families and look after the deceased until the time of interment.

‘It will take time to get my body back,’ Yvonne Okwara on life post spinal surgery