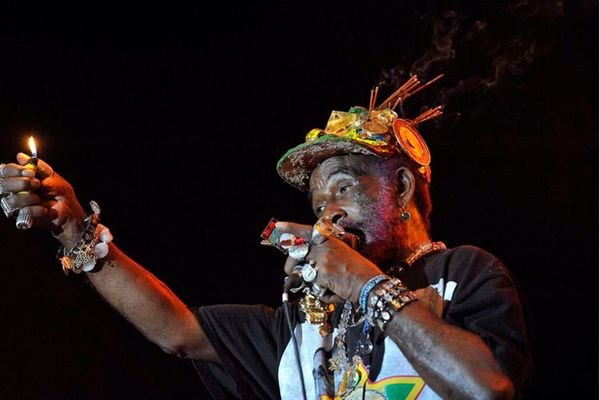 Lee “Scratch” Perry, the wildly influential Jamaican singer and producer who pushed the boundaries of reggae and shepherded dub, died Sunday. He was 85 years old.

No cause of death was given, but Jamaican Prime Minister Andrew Holness said in a statement the visionary died while in the Noel Holmes Hospital in Lucea.

“Today Jamaica has lost the rhythm and soul of a prolific music icon who has inspired many,” Holness said in the release.

“Lee ‘Scratch’ Perry was truly one of the most important and creative figures to have come out of Jamaica.”

A producer for a wide array of artists including Bob Marley, Perry’s mastery traversed time and genre, his impact evident from hip hop to post-punk, from The Beastie Boys to The Clash.

“My father worked on the road, my mother in the fields. We were very poor. I went to school… I learned nothing at all. Everything I have learned has come from nature,” Perry told the British music outlet NME in 1984.

“When I left school there was nothing to do except field work. Hard, hard labour. I didn’t fancy that. So I started playing dominoes. Through dominoes I practiced my mind and learned to read the minds of others.”

“This has proved eternally useful to me.”

He began selling records for Clement Coxsone Dodd’s sound system in the late 1950s, while also cultivating his own recording career.

Perry broke ranks with Dodds over personal and financial conflicts, moving to Joe Gibbs’s Amalgamated Records before also falling out with Gibbs.

In 1968, he formed his own label, “Upsetter Records.” His first major single, “People Funny Boy” — a jibe at Gibbs — was praised for its innovative use of a crying baby recording, an early use of a sample.

He gained fame both in Jamaica and abroad, especially in Britain, drawing acclaim for his inventive production, studio wizardry and eccentric persona.

In 1973, Perry built a backyard studio in Kingston, naming it the “Black Ark,” which would birth countless reggae and dub classics.

The producer for a number of landmark dub records — along with Marley, he worked with Max Romeo, Junior Murvin and The Congos — Perry was key in taking Jamaican music to the international stage, crafting sounds that would endure for decades.

According to lore, he created drum effects by burying a mic at the base of a palm tree, and wove the sound of marijuana smoke blown into a mic into his works.

“You could never put your finger on Lee Perry — he’s the Salvador Dali of music,” Keith Richards told Rolling Stone in 2010.

“He’s a mystery. The world is his instrument. You just have to listen. More than a producer, he knows how to inspire the artist’s soul,” Richards told the magazine.

“He has a gift of not only hearing sounds that come from nowhere else, but also translating those sounds to the musicians. Scratch is a shaman.”

The highly sought-after producer — the likes of Paul McCartney recorded with him — continued to mix and release his own music with his band the Upsetters, but began suffering mentally in the 1970s. The Black Ark fell into disrepair.

The studio ultimately burned down; Perry holds he set it ablaze himself in the early 1980s.

Perry began traveling and living abroad, ultimately settling in Switzerland for a time with his family, and remained prolific until his death.

“What a character! Totally ageless! Extremely creative, with a memory as sharp as a tape machine! A brain as accurate as a computer!” wrote the British artist Mad Professor, Perry’s long-time collaborator, on social media Sunday.

Praising Perry’s “pioneering spirit and work,” the Beastie Boys also tweeted an homage: “We are truly grateful to have been inspired by and collaborated with this true legend.”

We come to you. We are always looking for ways to improve our stories. Let us know what you liked and what we can improve on.