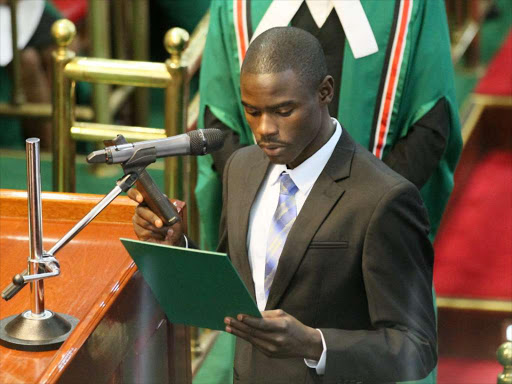 Youthful Igembe South MP Paul Mwirigi on Sunday  threatened to return a car gifted to him by President Uhuru Kenyatta after the 2017 elections.

In a Facebook post, Mwirigi said he will not be intimidated by President Uhuru’s allies on the pretext that the Head of State bought him a car, while at the same time accusing Agriculture CS Peter Munya of “using the gift from the president to blackmail me to change my stance” in the coming presidential election.

Mwirigi said some leaders have been castigating him claiming that by supporting DP William Ruto, he was disrespecting the president.

“If at all CS Munya is speaking for the president, (since he has done this repeatedly on different occasions), I may, for the sake of my peace of mind and independence, consider returning the gift,” he said.

Mwirigi said he will not bear the blackmail by the CS anymore, and if the attacks are an orchestrated plan to coerce him to change his decision, it will be an exercise in futility.

The sentiments come after CS Munya told the MP that he was betraying President Kenyatta who gifted him a car by opting to support Ruto.

He was speaking at an event in Igembe South in Meru County.

When Mwirigi was given a chance to address, he appeared to downplay Munya’s remarks on betrayal and went on to maintain that he is in the UDA party to stay.

He went on to explain that his decision to work with Ruto is because he came in handy when he and his people needed help.

“I am going to vie for a second term in office on a UDA party ticket. That is my party and my Presidential candidate is William Samoei Ruto who will be elected on August 9, polls,” he said.

Mwirigi said it is the DP who prompted Uhuru to give him a car and he, therefore, owes him no allegiance because of that.

Mike Sonko to run for Mombasa Governor, cleared by his party