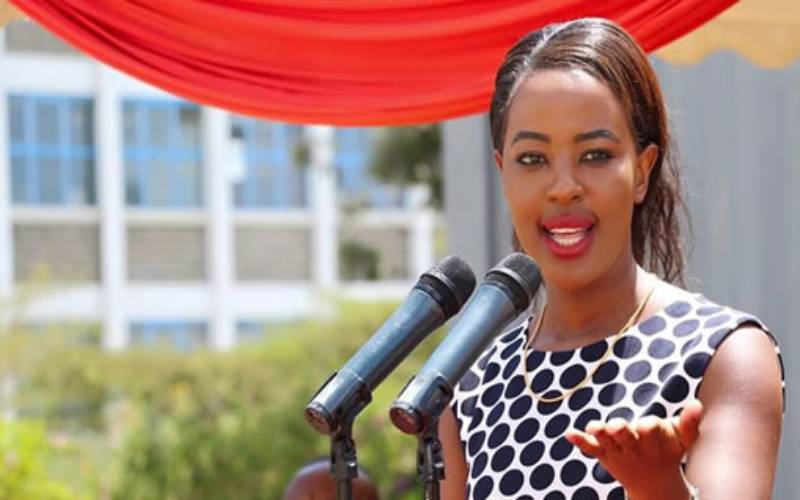 According to the former First Lady of County Number 17, her past, present and future was, is and will always be anchored on God.

Even as so much is being said or written about her, she says “I leave my life in His hands”.

Weeks after announcing her separation from Governor Alfred Mutua, Lillian spoke exclusively to The Standard about her life.

A raving beauty with a solid education, Lillian says she’ll say very little, or nothing about her now-overt display of love with musician Juliani, whose real name is Julius Owino.

The little she’s said about her widely-reported relationship with Juliani is: “We are two fully conscious adults who have chosen to be together. Any other narrative is false, outdated, and ill-intentioned. Let us respect people’s choices. Love and let love.”

That message was posted on her Instagram page on September 3. After that post, there’s only one photograph on her timeline, in which she describes herself as a “masterpiece”.

So what is this “masterpiece’s” upbringing? What does she stand for? What does the future hold for her?

“I am God’s finest art,” Lillian says while occasionally shifting her smile between Duchenne and Panam. “I’m living my life as an instrument of God’s greatness.”

The tricenarian says she was born and brought up in Kiambu County. She’s so particular about details, and it’s the misreporting here and there about her that provokes the quest to set the record straight, especially in regard to her education.

“I read a report somewhere stating that I attended a secondary school in Thogoto, Kabete Constituency. No. I am a proud alumnus of Loreto Girls’ High School in Kiambu.”

She is a holder of Diploma and Bachelor’s Degree, both in Hospitality and Tourism.

“For my Master’s [degree], I branched out because I believe people can have different careers in their lifetimes. As a result, I studied a course in Project Management.”

The former First Lady of Machakos County says, just like many other women seeking financial independence and diversity when it comes to income-generating projects, she started a beauty shop, which, unfortunately, failed to pick up.

“I had two beauty parlours, which I closed after three years. I currently run a tours and travel company. I also ventured into the renovations sector. I’m optimistic that the company, which is called Lil Renovates, will pick up. I’m banking on my keen eye for detail in running these two businesses,” she says, adding that she is hopeful to enter the woodwork trade.

The thirty-something-year-old says, on reflection, her foundation – the Lillian Ng’ang’a Foundation which she formed in 2017 during her stint as the First Lady of Machakos – helped several less-privileged children get an education in the county.

“The foundation also has a girl-empowerment programme as well as a support programme for cancer patients. In the future, I would add more programmes, including rehabilitation of street children.”

What next for the entrepreneur? “I am ready and open to all that is ahead for me. Each step I take is orchestrated by God. I’ll always leave my life in His hands so that He can guide me. Cheers to new chapters and greatness!”

READ ALSO  How wealth declaration was implemented in Kenya

Lillian’s parting shot? “Know yourself; know what you stand for.”