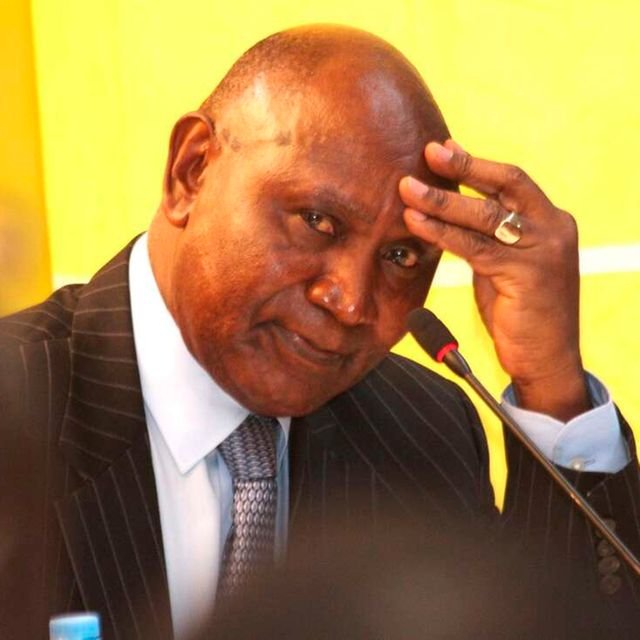 Edward Ouko quit a better paying continental job to become Kenya’s first Auditor-General under the 2010 Constitution. Why? He wanted to serve his country — and diligently.

As he settled in his office at the Anniversary Towers in Nairobi, he became a nightmare for accounting officers in the youthful Jubilee administration — and for the tenderpreneurs who milk the State coffers, dry.

Most accountants — at the University Way office — admit that Ouko became one of the most unpleasant auditors they had ever met.

The man, who quit a similar job at the African Development Bank (AfDB), to take a government job, was good at what he did. To some he was just too good; just as in Abidjan, where he was the bank’s Auditor-General.

To others, he was an irritant, a public nuisance, and a man who liked to bite more than what he could chew.

A distinguished accountant, who was also in charge of the anti-corruption and fraud function at AfDB, Ouko stopped at nothing.

Like every good auditor, Ouko, who studied finance and accounting at the University of Nairobi, suspected everything. He doubted everything he was told until he could verify it. He only believed when he saw a document to prove it.

As a result, he stepped on many toes and was rarely moved in his pursuit for truth. That way, he ruffled more than just a few feathers. If he was ever scared by the list of friends that were now becoming enemies, then he never showed it.

That was before Eurobond happened — a complex web of transactions where Kenya was to seek money to retire a syndicated loan of USD600 million. The market road shows brought more than Kenya required with investors willing to lend Kenya Sh250 billion from an initial target of Sh75 billion.

Once the money came, the hide-and-seek game began.

Ouko’s resolve was to find out which projects the billions funded — a testing time for an auditor.

As it turned out, the Eurobond would be the one audit assignment that gave a man — who had over three decades’ experience in auditing, accounting and investigations — most pain and would threaten to derail his career.

More than one year after exiting office, Ouko is still not ready to talk about what exactly happened. He prefers to keep a low profile, take care of his family, than talk about an eight-year turbulent reign that saw him fear for his life at some point and sue President Uhuru Kenyatta.

To understand his predicament, you have to go back to events that happened in 2014.

At this time, the Jubilee government had just settled in office and was lining up mega infrastructure plans from modernising the dilapidated railway system to new roads, airports to sea ports alongside massive energy projects.

The man at the centre of the fundraising was Henry Rotich, the first Treasury boss in President Uhuru Kenyatta’s administration. Rotich, an economist, came to office with just what the new administration needed. His fundraising skills were undisputable but was not one of the top talents at the Treasury.

He would quickly lead his team to what was billed as the largest successful debut bond issuance in Africa.

Rotich raised USD2 billion in June 2014, which is an equivalent of Sh220 billion at current exchange rates, through an international sovereign bond. At the time the money was raised, this was about Sh174 billion.

A sovereign bond is a debt instrument, usually denominated in a foreign currency, issued by a government to borrow money with a promise to pay a certain amount of interest for a number of years.  Thereafter, the issuing government would repay the face of the value on maturity.

READ ALSO  Prof Joseph Karanja Kimani passes away in the US

Kenya’s Eurobond, which was marketed as an infrastructure loan, would be voted the best emerging market deal in Africa and third in emerging markets in 2014. But after the money came, drilling down the billions to where they ended became a nightmare for Kenya’s first Auditor-General.

Before he left office, for good, Ouko documented his last efforts to track down the billions in an April 2019 special audit, in which he explains how he hit his final wall. He sent his investigators to London and the US, but they returned home with more questions than answers.

In the special audit, Ouko explains that the Sh220 billion was to be issued as follows. An aggregate principal amount of Sh55 billion (USD500 million) at the rate of 5.875 per cent that was due in 2019.

The remaining Sh165 billion or USD1.5 billion was issued at a slightly higher rate of 6.875 per cent. This was to mature in 2014. All these were to be transacted by June 2014. Not the entire amount made it to the government’s accounts at the Central Bank of Kenya (CBK).

This is because the Treasury had some bills to pay in lawyers, joint lead managers, road show expenses and other transaction expenses associated with the initial issuance.

In total, these added up to about USD1 million, or Sh110 million in Kenyan shillings. So the net proceeds for this loan was USD1.998 billion. This is about Sh219.8 billion at the current exchange rates.

Satisfied with the debut issue and seeing the huge appetite for the bond abroad, Treasury went back in December, six months later, for another loan that was to be known as a tap sale.

A tap issue allows borrowers to sell bonds or other short-term debt instruments from past issues. The bonds are issued at their original face value, maturity, and coupon rate. For Kenya, this was going to be a cheaper alternative to go back to the market and raise additional funds, riding on the June 2014 issue.

Collectively, this was another Eurobond and it translates to Sh82.5 billion at the current exchange rates (USD750 million).

In total, the twin 2014 Eurobonds raised USD2.815 billion, which is equivalent to Sh309.5 billion at current exchange rates. (At issue, this was about Sh280 billion, but the weakening Kenyan shilling against the dollar makes dollar denominated loans more expensive at maturity).

JP Morgan Chase Bank New York and Citibank N.A New York were the receiving banks for the proceeds of Eurobond during the initial issuance.

For the first issuance of USD2 billion, Ouko says the money was collected by the receiving banks and subsequently transferred in three batches in bulk to JP Morgan Chase Bank New York – GoK/CBK Sovereign Bond Account Number 60314998. The money earned some USD245,956 (Sh27 million) as interest.

There were five main transactions that happened in this account. The first was a federal tax on interest withheld of USD21,431 (Sh2.3 million) that happened on June 30, 2014.

There are three transactions that happen on July 3, 2014. First the Treasury repays a syndicated loan to Standard Chartered Bank New York of USD604 million (Sh66.4 billion).

The other transaction on July 3, 2014 was a transfer of USD395.4 million (Sh43.4 billion) to the Federal Reserve Bank of New York. This caused another transaction of USD47,436 (Sh5.2 million) in interest withheld.

The final transaction on that account happened on July 30, 2014. This was the wiring of the remaining USD999 million (Sh109.8 billion) to the Federal Reserve Bank of New York, the Central Bank of the US.

The Central Bank of Kenya, which is the official government bank, explained that the transfer to the Federal Reserve Bank was to exchange it with Kenyan shillings, for banking in its accounts here in Nairobi.

The account operation charges for this sovereign bond account at the JP Morgan Chase Bank New York amounted to USD156,397. This was paid on September 10, 2014. After this, the account balances remained zero.

The Treasury appointed JP Morgan Chase Bank London and Citibank N.A London as the receiving banks of the proceeds of Eurobond during the tap sale in December of 2014.

On December 18, 2014, all the money in this account was once again transferred to the US Federal Reserve Bank, and in return, the CBK got the equivalent of USD815.4 million at the time in Kenyan shillings. At that time, the exchange rate for every dollar was about Sh90 on average. This means that Kenya got about Sh73.3 billion in the exchange.

Ouko says in his report that he was satisfied with the fundraising audit trail and he was certain that the money raised, less transaction related costs and the deductions to repay the syndicated loan, ended in government accounts.

But the audit trail went cold after the money converted into Kenyan shillings and transferred into government accounts. Once in the CBK accounts, it was ‘deposited in one pot’ with the rest of the funds. Therefore, it was impossible for him to find out which projects it funded or if it ended up paying salaries and other recurrent expenditure, which would be illegal.

“The special audit, therefore, confirmed that the Eurobond proceeds were received and were fungible (came into one pot), at the National Exchequer Accounts in Central Bank of Kenya and, therefore, not identifiable to any particular infrastructure project,” Ouko notes in in his special audit.

“Consequently, the proof in total for the fiscal year 2014/2015 was necessary and this required a delay to allow for an audit trail through to utilisation in order to be conclusive,” he adds.

The report notes that a portion of the proceeds of Eurobond totalling USD604,560,737 (Sh53.2 billion at the 2014 exchange rates) was utilised overseas as repayment of a syndicate loan.

The balance of the proceeds of Eurobond from both the original issuance and the ‘tap sale’ were received into the National Exchequer accounts in three batches. The first wire of Sh34.6 billion (at the 2014 exchange rates) was received in the CBK account number 1000003987 on July 3, 2014.

You will expect that with two different accounts for the inaugural Eurobond and the tap sale, the rest of the audit would have been a walk in the park.

There is something else that Ouko found after he hit a dead end.  He discovered that six ministries, departments and agencies, did not process transactions worth Sh725.3 billion through the Integrated Financial Management Information System (Ifmis) in the 2014/15 financial year.

Ouko said that based on the understanding that expenditure is initiated by the user through the budgetary and appropriation process, the special audit noted that these expenditures, especially for the Ministry of Defence and the NIS, were under the rubric of confidential expenditure as they were disbursed and utilised outside of the government Ifmis.

The Ifmis is supposed to be the single source of truth for auditors looking into government spending since it captures leaves behind an expenditure footprint. If money is spent outside the system, it is difficult to independently follow it.

Ouko had three things to say after the audit.

He confirmed receipt of the Eurobond proceeds into the National Exchequer. He also noted that he could not trace the funds to the end user and finally recommended that subsequent issuance of Eurobonds should be earmarked and be identifiable to specific development projects.

“Utilisation of the proceeds of the Eurobond could not be traced to specific development projects,” Ouko said adding that the Treasury explained that these funds were ‘fungible.’

“Furthermore, as identified in the report, some of the funds were expended outside the government Integrated Financial Management Information System,” Ouko said in the special audit signed in April 2019.

According to Ouko, the Eurobond billions did come home and were properly reconciled in government books.

Did government accountants become too smart for him to beat him at his own game? Or was he too scared for his life and opted to look away and retire in peace?

How Eurobond billions were shared – Treasury

Related Topics:Edward Ouko
Up Next

Kenyan storyteller nurse in US contracts Covid-19 days after vaccination